When it comes to medico-legal issues, many residents can summarize their thoughts into a single word: “fear.” It is a topic not often formally taught and rarely openly discussed. Concrete examples and practical advice are frequently in short supply, with the occasional whispers of  the case that ended in court. Other difficult topics have had many institutional teaching resources dedicated to addressing them–why not this one?

At the University of Ottawa, their residency program integrates the teaching of medico-legal issues into their academic day. This Feature Educational Innovation (FEI) was originally posted by the CAEP EWG FEI Team on November 12, 2014 and answers the question: “Is it feasible to simulate a real-life court case in resident training programs?” A PDF version is available here. A CAEP cast is available here.

As an emergency physician, being summoned to court as a result of a patient encounter is an uncommon, unfamiliar and unusually stressful experience. Learning how to prepare for and behave in court is largely experiential, “once you go, you know,” and not traditionally taught during residency. Having residents practice the skills necessary for the courtroom experience is important for their practice development as most emergency physicians are likely be called to court during their career.

To do this, a flipped classroom technique was used during an Academic Half-Day (AHD) session. An information video outlining the background necessary to understand the Canadian legal system, its players, the differing roles of a material versus an expert witness, and how to prepare and conduct oneself as a witness from the time of summoning until the time of dismissal, was prepared and distributed to the residents ahead of the session. Additionally, each resident attending the session was required to submit in advance one patient encounter that would serve as the basis for their witness testimony. Each chart was reviewed by the author as the session facilitator, and a line of legal questioning was developed for each. 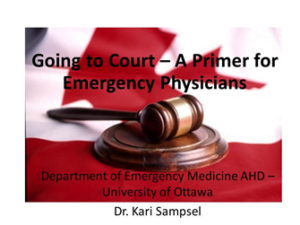 For the AHD session itself, a conference room was set up to simulate a courtroom, with a witness stand and observation gallery. The facilitator acted as the legal counsel calling each resident up to the witness stand individually, swearing them in and questioning them as if they were truly on the stand. Each line of questioning, based on the patient encounter sent to the author, highlighted a different tactic or area of questioning that has been used in the legal examination of emergency physicians. Each chart was projected on the screen behind the witness stand for the benefit of the gallery (the rest of the resident cohort), who would have been unfamiliar with the details of the patient encounter.

Following each witness testimony, there was discussion of the theoretical concepts and practicalities behind the questions and answers. This flipped classroom approach allowed each resident to review the necessary background information at their own pace ahead of time and then to experience what it is like to deliver testimony in a court of law in a low-stakes educational environment. The resident-driven discussion after the testimony additionally served as a debriefing for the resident who had just completed their turn on the stand.

This session was greatly valued by the residents as evidenced by the favourable comments and outstanding ranking on their evaluations. This type of session is easily replicated and provides an effective simulation of a real-world legal encounter such that future emergency physicians are better prepared and less anxious when they receive their first summons.

At the EM Chief meeting at the last CAEP conference, University of Ottawa was celebrated for its distinction in “transition to practice” seminars such as this one. How has your institution empowered its residents to take on independent practice?

More About the CAEP FEI

This post was originally authored for the Canadian Association of Emergency Physicians (CAEP) Feature Educational Innovations project sponsored by the CAEP Academic Section’s Education Working Group and edited by Drs. Teresa Chan and Julien Poitras. CAEP members receive FEI each month in the CAEP Communiqué. CanadiEM will be reposting some of these summaries, along with a case/contextualizing concept to highlight some recent medical education literature that is relevant to our nation’s teachers.

Kari Sampsel is the Assistant Program Director at the University of Ottawa FRCP EM program. She holds a fellowship in clinical forensic medicine has interests in law and women's health.

Daniel Ting is an Emergency Physician and Clinical Assistant Professor at the University of British Columbia, based in Vancouver. He is the Editor-in-Chief of CanadiEM and a Decision Editor at the Canadian Journal of Emergency Medicine. He completed the CanadiEM Digital Scholarship Fellowship in 2017-18. No conflicts of interest (COI).