It was my first ER shift in charge of the Resuscitation area. Needless to say, my adrenaline and nerves were firing like crazy; being responsible for the sickest of the sick that rolls through our doors is a daunting task, especially since we were the local trauma center.

The shift was going relatively well, and with only a few hours left I was beginning to breathe a sigh of relief.

There is no mistaking that obnoxiously loud paramedic patch phone ring, even from the other end of the department. I turned and saw the charge nurse pick up the call. The knot in my stomach quickly tightened as I watched the color literally drain from her face, before asking over the phone, “I’m sorry, what?”

Oh, I had forgotten to mention, it was a July evening with the biggest annual outdoor music festival being hosted in our city (see Bluesfest). Apparently, a freak thunderstorm decided to pound its way through the city, and the main stage of the final act collapsed mid-act: 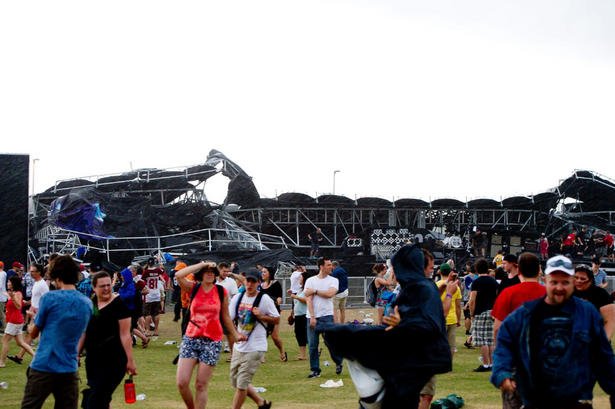 The only information that was conveyed over the patch call before the paramedics rushed into the chaotic scene was this – “The main stage at Bluesfest collapsed on the crowd! Likely people trapped under with penetrating wounds! No idea how many – expect the worst!”

One of the most important decisions for a receiving mass casualty facility to make in such a scenario, is how to prepare adequately for the potentially overwhelming influx of critically ill patients. In Canada, most hospitals have structured contingency plans for this…commonly known as a Code Orange. It usually involves a rapid call-out to off-duty staff to come in, mobilization of patients out of the ER and into the hospital hallways, and canceling of all elective surgeries and procedures.

Code Orange is a very expensive protocol, and can negatively affect patients who are already in the hospital as we try to create surge capacity for mass casualty events. You might even remember stories of Code Orange being called for severe ER overcrowding.

And the decision to trigger a Code Orange for the stage collapse? All mine.

The problem was, I felt like there just wasn’t enough information to make that decision. Were we expecting 2, or 200 patients? Were they serious wounds or minor scratches? How quickly would they be coming through our doors – all at once by ambulance, or slowly as patients make their own way to the ER?

We tried calling the paramedics back, but no luck – they of course were physically busy at the scene. Then I heard a resident beside me wonder out loud as she pulled out her iPhone, “Hmm, I wonder what people there are tweeting.”

I paused. Tweeting? Isn’t that some weird online blogging thing?

We quickly logged onto Twitter, and found a steady stream of live updates from spectators at the scene.

Wow, main stage collapsed, while the band was still on!

Giant storm hits Bluesfest! Stage down! Everyone running – but no one hurt?

I was getting much more accurate up-to-the-second information on what was going on through the many eyes of the Twitter users, than I was getting from official paramedic and police channels. It was the first time I caught a glimpse of what a powerful tool social media could potentially be in healthcare, despite all the press on the concerns regarding confidentiality, reliability of medical information, and lack of regulation.

How do you see the evolution of social media in your healthcare?