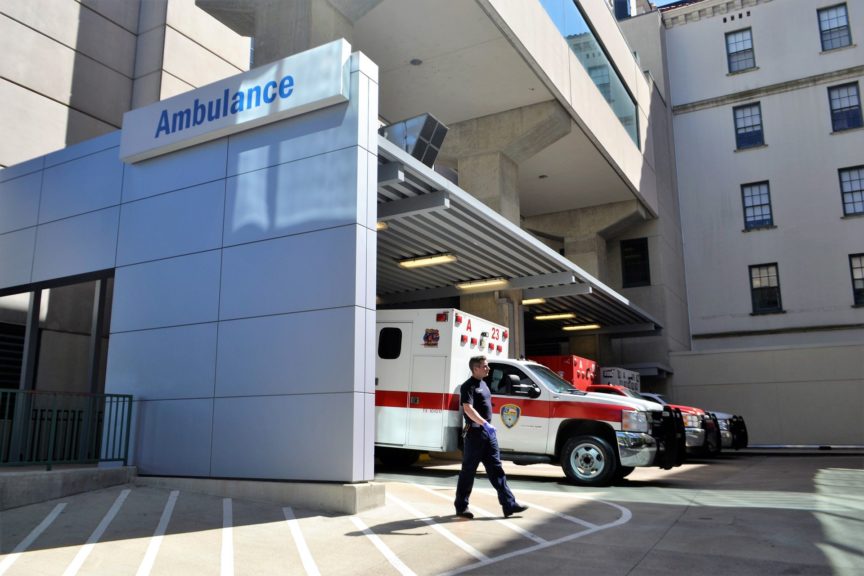 A 21-year-old male presents to your emergency department via EMS after suffering a motorcycle accident.  He was travelling at approximately 80 km/h when he lost control of his vehicle and slid into a median.  He has an open fracture of his left tibia and fibula, but bleeding is controlled, and his left foot is neurovascularly intact.  Despite receiving 10mg of intravenous morphine given by paramedics, he is screaming in pain and you are unable to perform your trauma assessment.  Vital signs are: BP 90/50, HR 125, RR 28, O2 99%, T 36.6C, glucose 8.8, GCS 15.  The orthopaedic surgery team has assessed the patient but will not have an operating theatre for 30 minutes.  How will you control his pain?

For emergency department trauma patients, is ketamine a safe and effective option for analgesia when compared to current standard practice?

2 databases were searched, published data after December 31, 2018 was not reviewed.

Ovid MEDLINE: Keyword search ketamine and analgesia and trauma limit to full text English last 5 years (16 results).  The literature search was not further narrowed down with advanced features because of the limited amount of published data on the topic.

Trauma is a pervasive and often painful disease, affecting people of all ages across the country​1​. Early and effective analgesia in the trauma bay is important not only for acute symptom control, but it has also been associated with decreased chronic pain, as well as a shorter period of recovery​2–5​.  Several factors contribute to the selection of analgesic medications, and adequate pain control is often incomplete​6–8​ or difficult to achieve. Opioid medications are often appropriate first-line analgesics for acute pain but come with hemodynamic and respiratory depression, as well as concerns surrounding the ongoing opioid crisis.  Ketamine is a dissociative and analgesic medication that can be used alone or in tandem with other analgesics.  Away from the emergency department, research has been performed to examine the safety and efficacy of ketamine for trauma patients, showing that ICU patients with a sub-dissociative ketamine infusion used less opioid analgesics and had preferable hemodynamics​9​.  Ketamine’s analgesic effect has also been studied for procedural sedation, where it has demonstrated both equivalent and inferior analgesia (when combined with a sedative) to opioids​10,11​.  Here we present the current literature surrounding the safety and efficacy of ketamine in the trauma bay in order to establish its utility for these patients.

Early and effective analgesia in trauma patients improves outcomes and limits disability, but pain is often overlooked in the unstable patient, or hemodynamically depressing medications are foregone for fear of losing stability.  In the right patient and when coupled with other analgesics, ketamine may limit hemodynamic depression while effectively treating pain.  This review was undertaken to gain a deeper understanding of the safety and efficacy of this medication and, if supported, to encourage emergency physicians to consider low-dose ketamine for analgesia in trauma patients.

The Efficacy of Ketamine for Analgesia

There is diverse evidence demonstrating the efficacy of ketamine as an analgesic for trauma patients:

The Safety of Ketamine

The safety profile of ketamine has also been examined in the literature, specifically:

Ketamine as an analgesic is almost always studied as a medication co-administered with another analgesic or a sedative, confounding bias must be considered whenever interpreting the results from the studies described above.

There are several challenges with studying acute analgesia in trauma patients. Pain is a relative and inherently subjective experience and assigning it a number on a pain scale does not make it truly objective.  Also, many physicians are hesitant to examine a new medication when so many effective options already exist.

You estimate the weight of the patient at 75kg, and deliver 20mg of IV ketamine (0.27mg/kg) to the patient, in addition to a further 5mg of IV morphine and 15mg of IV ketorolac.  His pain rapidly reduces and you are able to safely complete your trauma assessment on a comfortable patient.

Dr. Casey Petrie is a 3rd year emergency medicine resident at Queen's University. He has a special interest in pain and the way that we manage it in the emergency department.

Dr. Melanie Walker is a Research Scientist and the Resident Research Director in the Department of Emergency Medicine at Queen's University.

Dr. Tim Chaplin is an Emergency Physician and Trauma Team Leader with the Department of Emergency Medicine at Queen’s University. He is also the medical director of the RACE Team at KGH. His academic interests include resuscitation and simulation-based education. Outside of work, Tim enjoys the lake and the odd triathlon.