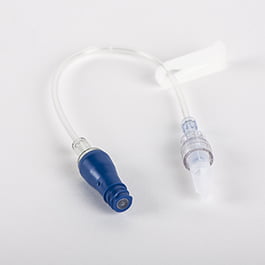 While working nights with an EMS crew, you arrive on scene to find a 24 year-old male who was thrown from his vehicle at highway speeds. You estimate that there was 1500 mLs of blood loss visible on the road, with active bleeding from his left femur and abdominal guarding. After applying a C-spine collar, a pressure dressing, and moving him into the back of the ambulance, you start an 18 gauge IV in his right forearm and freeze; you think to yourself, “Should I place an IV extension set or connect the IV line directly?”

Would your response change if it was an elderly lady being transported from a nursing home for increased confusion?

Needleless IV tubing and extension sets were introduced in the early 1990s to combat workplace needlestick injuries and leaky ports.1 Many types were created and marketed by manufacturers, though ultimately they all provide a non-sharp connection to add lines to an IV. However, the added safety for medical staff had unintended consequences on the functionality of the tubing. Thinking back to physics class, we may recall Poiseuille’s Law, which states: the flow of a fluid through a tube is directly proportional to the 4th power of the radius of the tube, directly proportional to the pressure being applied, and inversely proportional to the length of the tube.

In English, this means the shorter and fatter the tube, and higher the pressure, the faster a liquid can be pushed through it; or simply put, “short and thick does the trick”. However, this only applies to laminar flow (perfect flow). If this were the case with IV tubing, we would expect adding five to seven inches of an extension set to 70 to 100 inches of IV tubing to have a small effect on the flow rate. Unfortunately, IV tubing is anything but perfect, and the connector points create areas of non-laminar flow, causing a larger decrease in the flow rate of the tubing. The IV connectors used in my health region use a Luer lock ‘negative pressure’ system and create an area of turbulent flow through the connector, though other systems including Luer lock ‘positive pressure’ systems and blunt cannula/split septum systems which also cause an area of turbulent flow. 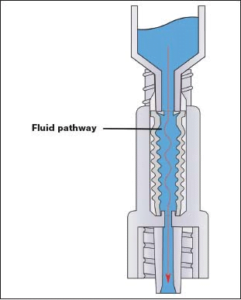 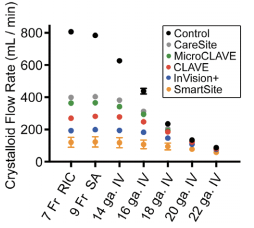 If they decrease flow so much, why do we use extension sets?

IV extension sets are preferred in patients who do not require volume resuscitation as they provide many benefits. First, they provide a small, easily managed tube that can be saline-locked and maintained to protect the IV from falling out or going interstitial when changing lines or administering intermittent IV medications. They also increase safety for hospital staff and patients as patients are less likely to lose IVs and need them replaced (reducing needlesticks for patients and staff). Finally, needleless extension sets include backflow valves that prevent blood from leaking out when changing lines. Effectively, they improve line safety and durability at the expense of flow rate.

Back to the cases

The 24-year old male trauma patient is likely going to require a large resuscitation and potentially the initiation of the massive blood transfusion protocol. He would benefit from having his line connected directly to the IV without a Needleless IV extension set because the rate of flow and volume resuscitation is a priority. The classic mantra of “2 large bore IVs in the AC fossae” should be followed and expanded to “with lines connected directly to the IV.” As a side note, if large bore is not possible, a 20G IV is the smallest size that can be converted to a rapid infusion catheter (RIC) line once in hospital using a guide wire.

Conversely, the confused lady being transported from the nursing home would likely benefit from having an IV started with the Needleless IV extension set as volume resuscitation is unlikely to be a priority, and maintaining a functional IV will be more important.

Most patients being transported to the ED should have a Needleless IV extension set connected to the IV catheter in order to help protect the IV, and make changing of lines / intermittent IV medication easier and safer to provide. Unstable trauma patients or patients requiring large volume resuscitation or massive transfusion protocol should have their IV line connected directly to the IV catheter in order to provide volume at the fastest rate possible.

This post was originally written by Dr. Hartmann under my direction as our local EMS Medical Director and modified for presentation on CanadiEM because I felt the information was so important. Over the last several years I have had many discussions about the impact of IV extension sets on flow rate. Initially I tried to use my deteriorating understanding of physics to argue that a dramatic decrease in flow made no sense given the small length of the extension set. However, as described eloquently by Dr. Hartmann above, the added variable of nonlaminar flow through the connection point is a game-changer that dramatically affects the flow rate. I believe that this is important information that should be understood by all healthcare providers involved in resuscitation as the numbers outlined above make it clear that extension sets should be given as much thought as the size of an IV placed in a resuscitation.

Riley Hartmann is an emergency medicine resident at the University of Saskatchewan.