One of the privileges (or annoyances, depending on who you ask) of being a medical professional is having your family and friends coming to you for anything that is medically related. They no longer trust their own family doctors; they question all the new medical advice they see on television; and they will simply not start any medications or go through any medical procedures without a phone conversation with you to see if it’s okay. Not only is it a compliment to your achievements, but it also serves as an interesting source of the weird and wonderful.

Take for example, a recent incident that I had with my own parents, which reminded me of the dangers of the internet and how the lay person acquires medical “knowledge” and “advice”.

Over a recent dinner conversation, my father brought up this miraculous self-cure for strokes that he learned about through the internet, and circulated urgently through his close circle of friends. It apparently originated from a well known Chinese professor Liu, who wrote: 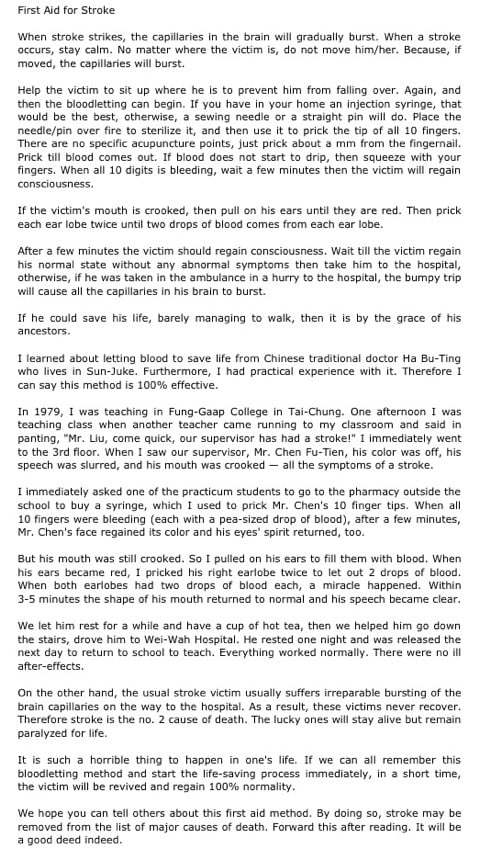 My father was convinced that this was valid, and proudly told me that he now carries a needle in his wallet. And so does his group of close friends. You laugh – but these are all arguably very successful and educated individuals. How did this happen?

I still remember doing a presentation on the rise of the internet during my medical school years – which wasn’t that long ago. We forget that the internet has been in existence shorter than people has had cell phones; yet one can access the Web so easily these days that it has quickly turned it into the go-to place for information. The speed with which the average person learnt to use the internet, however, failed to match the slow acquirement of skills necessary to discern the trustworthy information from the absolute junk.

Anyone can post anything on the internet, or circulate it in emails with official-looking headings and signatures. Anyone can claim to be a doctor or researcher, and anyone can report case studies, experiments, and research results to support whatever claims he/she wants to make. There is currently no reliable regulation on what “health information” is published and accessible on the internet. I truly think the internet community really messed up when it passed on the chance of setting aside the “.health” suffix that would’ve allowed the World Health Organization (WHO) to regulate reliable and ethical health information…instead they opted for others like “.xxx”.

Don’t get me wrong, I sincerely believe that there is great opportunity and potential for this technology in advancing healthcare (see my earlier post on one such potential use of social media) … however as it stands now, it has just as much potential for devastating harm. In fact, the internet has played a tremendous role in setting back modern medicine and population health involving issues such as vaccinations.

And just to be clear: poking your fingertips and earlobes with a needle will not cure your stroke. Even if we gave Professor Liu the benefit of the doubt, and assume that little story she told actually happened, it still doesn’t prove effectiveness of the intervention. What she described clinically was a transient ischemic attack (TIA), or mini-stroke, defined as a transient episode of neurological deficit – his chances of recovery was the same if she had sat back and flipped a coin.

The challenge then, is to educate and teach the public on how to find reliable information and avoid being misled by false/incomplete ones. Unfortunately, the web is rapidly evolving and becoming exponentially more complex on a daily basis – no longer are we dealing with static web pages, but intricate interactions on social networks that transcend the archaic desktop computer.

We may have already lost the battle.

For now, I am content to have convinced my father to stop carrying a needle in his pocket, if only to prevent him from accidentally stabbing himself during a golf swing.