A 2 year old male presents to the Emergency Department with his parents immediately after ingesting an unknown amount of Pina Colada e-cigarette (electronic cigarette) refill liquid (18mg/mL of nicotine).  It is a 30mL bottle and there is still some liquid inside.  His breath smells of Pina Colada.

This case is becoming more and more familiar in Emergency Departments across North America and around the world.  E-cigarettes and other nicotine replacement products have become very popular in the past several years as an alternative to cigarettes and as smoking cessation aids.  Cases of nicotine overdose and accidental ingestion are following a similar rise in popularity.  In New Zealand, the increase in calls to poison control about pediatric exposure to nicotine replacement therapy products has mimicked the increase in sales (Figure 1) [1].  Mean age of pediatric exposure was 29 months and 99.5% of exposures occurred in the patient’s own home.  In the United States, calls to Poison Control about e-cigarette exposures increased from 1 to 215 per month from February 2010 to December 2014 (Figure 2) [2]. 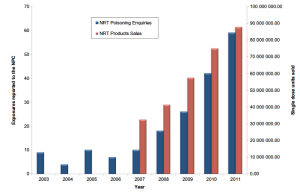 Figure 2. Calls to poison centers for e-cigarette and cigarette exposures in the United States. [2]

E-cigarettes contain a variety of substances and they are not guaranteed to be accurate to what is on the label.  Ingredients include nicotine, diethylene glycol, ethylene glycol, ethanol, formaldehyde, glycerin, flavouring, colouring, and much more. [3] The alcohols are usually used as solvents and generally the amounts are within approved FDA limits. [3] One brand, however, did contain an unknown amount of Oil of Wintergreen [3], which can cause salicylate toxicity in very small doses.  E-cigarette liquid can contain anywhere from 6-72mg/mL of nicotine, depending on the brand. [3]

E-cigarettes refills are particularly attractive to children.  They smell and taste delicious and they come in a wide variety of flavours and colours.  They have vibrant labels and some have cartoons on the packaging (Figure 3).  In Canada, advertisement or sale of liquids containing nicotine is illegal, but possession or consumption of them is not and it is easy to order products online.  In the United States, there are no FDA regulations regarding liquids containing nicotine.  Across North America, there is no legislation mandating child resistant packaging and most people do not know that nicotine can be toxic in small doses.

This brings us to the next question.  What is the lethal dose of nicotine?  Textbooks, safety datasheets, and poison control tend to cite 45-60mg of nicotine as the potentially lethal dose. [4,5]  It turns out that the original data was from a single paragraph in a textbook written in 1906 by Dr. R. Kobert. [6]  Kobert obtained his data by doing self-experiments and it conflicted with other data that was available at the time.  His reputation as a leading scholar in toxicology led to universal acceptance of 60mg as the lethal dose (LD50 of 0.5-1mg/kg). [6]  A comprehensive review by Mayer in 2014 suggests an LD50 of 6.5-13mg/kg (500-1000mg for adults), which is more consistent with actual fatalities and dog studies. [6]  Considering that e-cigarette liquid may contain up to 72mg/mL of nicotine, this lethal dose may still only be a millilitre of liquid for a child.  My interpretation of this data is that the lethal dose is probably higher than most textbooks state, but information is lacking and we should still err on the side of caution.  As ingestions become more frequent, more information will become available.

Nicotine can have a wide range of clinical signs and symptoms as it activates nicotinic receptors all over the body.  It primarily effects the autonomic, neuromuscular, and central nervous systems.  It is easier to remember if it is divided into early and late symptoms.  Early in toxicity (within the first hour or so) nicotine acts as a stimulant. [4,5]  Delayed effects (after an hour) are due to nicotinic receptor blockade (See Table 1).4,5  Nicotine has a short half life of 1-4 hours.4  Vomiting is an early sign and occurs in 50% of symptomatic cases. [4]  If symptoms are not seen within the first several hours, they are unlikely to occur.  However, the half life with large overdoses is not well studied and it may take up to 72 hours for symptoms to fully clear. [4]

If you have a patient with suspected nicotine overdose, how should it be managed?  The patient should be on a cardiorespiratory monitor, have intravenous access, and be watched closely.  Symptomatic management should be initiated (ie: anti-emetics, atropine for bradycardia, respiratory support as needed, benzodiazepines for seizures, etc.) Bloodwork may be indicated if the patient is unstable, the history is unclear, it was an attempted suicide, or if the toxidrome is inconsistent.  The use of activated charcoal for tobacco ingestions is recommended, but the benefit in liquid nicotine overdoses is unclear. [4,5]  Activated Charcoal is usually recommended within the first two hours post ingestion. However, its efficacy is questionable due to rapid absorption of liquid nicotine. This needs further study.”  Multi-dose activated charcoal may be indicated in patients with significant toxicity due to the enterohepatic circulation of nicotine. [4]  As always, one must consider airway precautions when giving charcoal to a patient who is vomiting or has decreased level of consciousness.  Unfortunately, there is no antidote and dialysis is not effective.  The physician should call Poison Control in all cases of suspected nicotine overdose.  The patient should be observed in the Emergency Department.  If they are without symptoms for several hours they may be discharged without follow up.

As primary care physicians it is our job to educate patients and parents.  The general public may not be aware that nicotine is toxic.  Patients should be advised to store nicotine refill liquids away from children and in a locked area.  It should be treated as any other dangerous medication and any history of ingestion, no matter how small, should prompt an immediate visit to the Emergency Department.  Physicians should also advocate for changes that may reduce unintentional exposures, such as FDA regulations and child resistant packaging.

The patient remained in the Emergency Department for 6 hours.  His vitals remained stable and he never developed any symptoms.  There were no investigations and he did not receive any treatment.  He was discharged home in the care of his parents, who were educated about the toxicity of e-cigarette liquid.