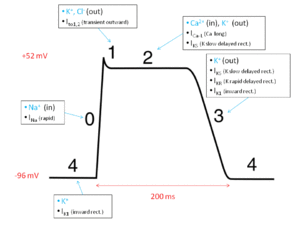 Editors Note: We are very excited to have our first professor of Nephrology guest blog with us here at BoringEM.  He kindly asked one of his residents to write up the “C BIG K DROP” mnemonic (see Tiny Tip from September 22, 2014), but he also obliged us with an expert review of the topic.

The association of electrocardiogram (ECG) changes in the setting of hyperkalemia is a medical emergency.  As with most emergent situations, the management strategy is to alleviate the consequences and then deal with the cause of the emergency.

In the presence of ECG changes and hyperkalemia, intravenous calcium (usually as gluconate, since chloride is chemically more toxic if extravasated) results prompt reversal of ECG changes. The effect is transient, but the calcium injection can be repeated until measures to correct the hyperkalemia are undertaken.

By its nature, shifting of potassium is a temporizing measure and needs to be followed by an elimination process.

Both intravenous insulin (followed by glucose to prevent hypoglycemia) and nebulized beta agonists produce similar (and synergistic) lowering of the potassium level by about 1 mmol/L by about one hour. The effect of insulin appears more predictable and robust (reviewed in [1]), and should probably be used first.

Intravenous sodium bicarbonate has been part of the “shifting” armamentarium for many years. By lowering the extracellular [H+] this favours export of protons from and influx of sodium to the cells via the Na+ / H+ exchanger (NHE). The extra sodium is then exported by the Na-K-ATPase and causes influx of potassium lowering the extracellular [K+]. While good in theory, it transpires that the NHE is probably inactive in the non-acidotic state, therefore this mechanism would be expected to work only if the patient were academic prior to the administration of the bicarbonate (reviewed in [1]). Certainly sodium bicarbonate is commonly used for patients with low pH (< 7.1 in my practice), but its effects in non-acidotic patients have not been shown to be great.

In patients with good urine output, intravenous furosemide can enhance elimination of potassium. The onset of action is fairly rapid in patients with normal renal function and can last for up to six hours.

The most controversial agent in the management of acute hyperkalemia is the ion exchange resin sodium polystyrene sulphonate (Kayexelate). This agent acts in the colonic and rectum, so any effect of oral administration is hampered by delays in gut transit time. This led to the combined use of Kayexelate with a cathartic such as sorbitol. Current warnings suggest an increased risk in colonic perforation in this setting. In the acute phase, there is non role for this oral agent (reviewed in [2] and [3].) The use of Kayexelate as a retention enema makes more intuitive sense, but there remains the concern of bowel wall necrosis. It is fair to say, that there is no role for this agent in the acute management of severe hyperkalemia.

Hemodialysis provides prompt reduction and elimination of potassium. There is the need for the patient to be at a facility which offers this treatment, central venous access has to be obtained, and the machine and staff have to be made available. The delay to starting dialysis de novo is usually in the order of 1 – 2 hours (longer if the patient has to be transferred.)

After the emergent situation is under control, attention needs to be directed at the cause of the hyperkalemia. For an excellent review of potassium disorders see [3].

This piece has been peer reviewed by Dr. Teresa Chan (@TChanMD), Managing Editor.

Latest posts by A. Ross Morton (see all)