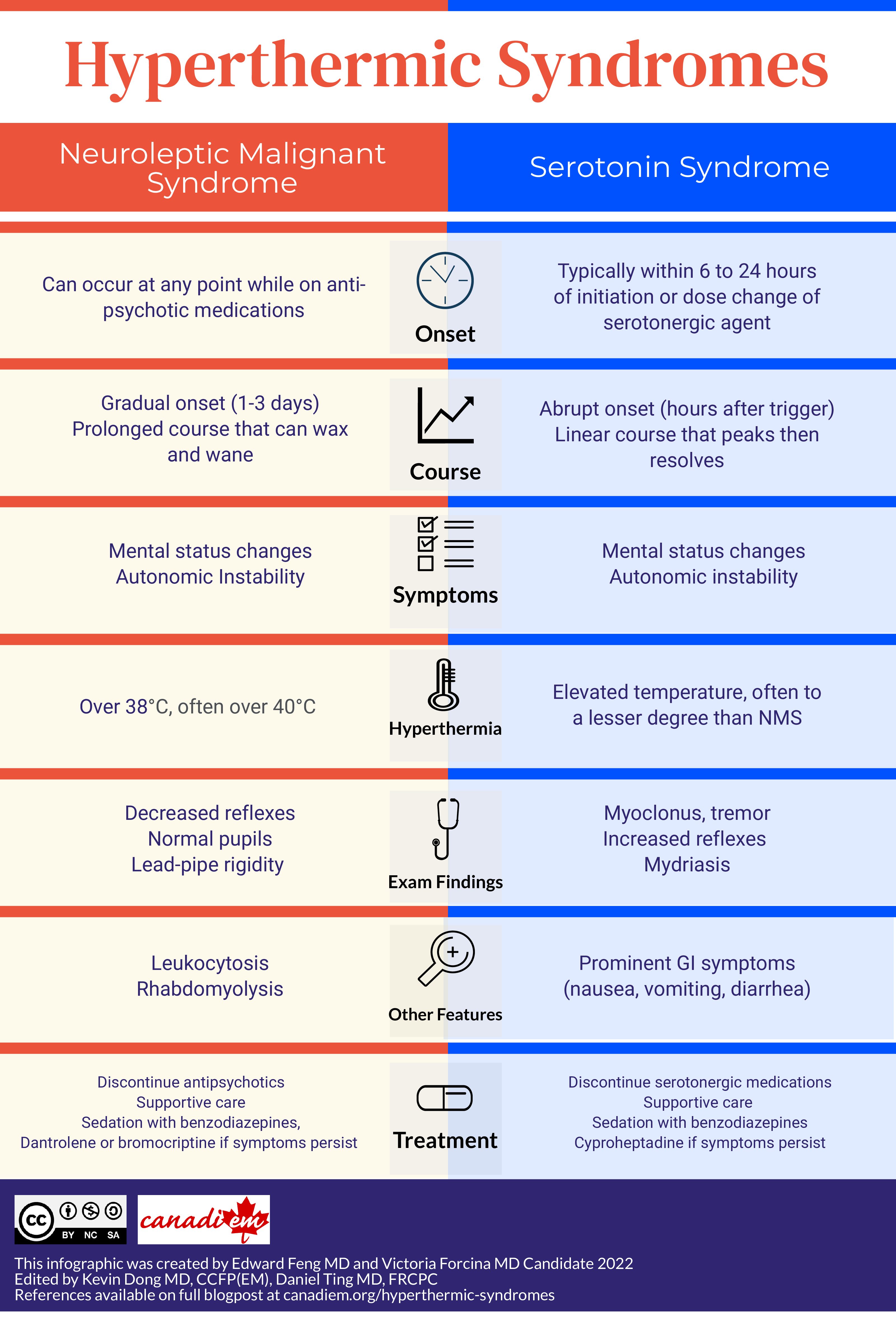 A 32 year-old female presents to your Emergency Department one afternoon with the presenting complaint of altered level of consciousness.  On examination you find her to be agitated and confused, as well as tachycardic and febrile at 39.5o C.  Collateral history from EMS is negative for any substance misuse.  When reviewing her chart, you find that she has recently been started on Risperidone for her schizoaffective disorder…

It is important to note that the terms fever and hyperthermia are not synonymous.  The hypothalamus is responsible for regulating body temperature, maintaining it at its normal set point (37.5 degrees C).​1​  In fever, this set point is increased, and the body subsequently increases heat production to reach the new set point.  In hyperthermia however, the setting of the hypothalamus does not change. Instead, body temperature is increased by one of two mechanisms: exogenous heat exposure, or endogenous heat production.​1​ This results in body temperature increasing in an uncontrolled manner, at a rate too rapid to be compensated for by our body’s natural ability to lose heat.  Aside from their different etiologies, it is important to differentiate between these two as hyperthermia can require different interventions than fever and can be rapidly fatal.

There are many types of hyperthermic syndromes in medicine, some of the more common causes listed in Table 1.

In this post, we will be talking about two of the can’t miss causes of hyperthermia commonly seen in the psychiatric patient: neuroleptic malignant syndrome and serotonin syndrome.

Neuroleptic Malignant Syndrome (NMS) occurs in 0.02-3% of patients taking antipsychotic medications.​2​ Most commonly, NMS is seen with first generation antipsychotics such as Haloperidol, but can occur in any class of antipsychotics.​2​ Symptom onset typically occurs during the first two weeks of initiation of antipsychotic therapy, although it can occur at any point after initial treatment. NMS is known for its four classic clinical features remembered by the mnemonic HARM: hyperthermia, autonomic instability, rigidity, and mental status change.​2​  The diagnosis should always be considered in patients taking antipsychotic presenting with 2 or more of these symptoms. These four symptoms tend to develop gradually over 1-3 days with a prolonged disease course that can wax and wane.​1​

If NMS is suspected in a patient, the patient’s antipsychotic medication should be discontinued, and vitals should be monitored closely; if clinical symptoms are severe, admission to ICU may be required.​3​ If discontinuation of the antipsychotic agent does not provide clinical improvement, benzodiazepines, dantrolene, bromocriptine or amantidine should be considered.​3​ Electroconvulsive therapy can also be considered if residual symptoms persist following resolution of other symptoms.​4​

SS is a clinical diagnosis made using the Hunter Criteria, history and physical examination.​5​ The Hunter criteria specifies that a patient must have taken a serotonergic agent and meet one of the conditions:

Both serotonin syndrome and neuroleptic malignant syndrome are key diagnoses to be considered in the differential for the hyperthermic patient.  Look for key clues in the history such as medications taken, recent dose changes, and onset of symptoms.  An easy way to remember the clinical features for the two syndromes are the mnemonics HARM and MAN.  Once diagnosed, treatment revolves around discontinuation of the offending medications and supportive care.

On further examination you also notice generalized “lead-pipe rigidity” in the patient. You make the diagnosis of neuroleptic malignant syndrome and ensure that no further doses of anti-psychotics are given; instead, you treat her with fluid resuscitation and continue to monitor her.  You treat her agitation with benzodiazepines, but her symptoms persist and eventually admission to hospital is needed.

This post was copy-edited by Casey Jones (@CaseyMAJones) and was edited by Daniel Ting (@tingdan).

The \"Hot and Bothered\" patient in the Emergency Department is a dangerous presentation with a broad differential diagnosis. Remembering to check for neuromuscular abnormalities (i.e., clonus in serotonin syndrome or rigidity in neuroleptic malignant syndrome) as a routine part of the physical exam of these undifferentiated patients can be the key in making this rare diagnosis.

Daniel Ting
Dr. Daniel Ting is the Editor-in-Chief at CanadiEM. He is an Emergency Physician at VGH, BC Children\'s and UBC Urgent Care, as well as a Clinical Assistant Professor at UBC.

Victoria is a third year medical student at McMaster University's Niagara Campus. Her interests include social and addictions medicine. In her free time, she enjoys skiing, doing puzzles, and spending time with her cat.

Edward is a Family Medicine Resident at the University of Toronto. His interests include medical education and health policy. In his free time he can be found playing board games or cooking up a storm.