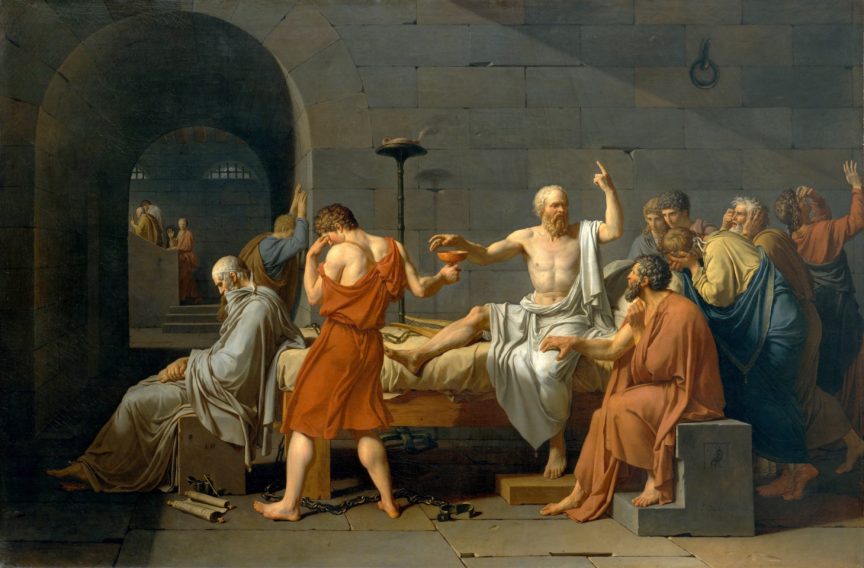 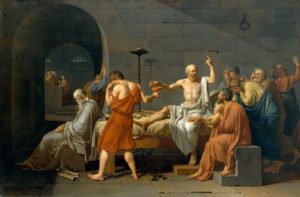 “Hidden stories” is a new series for Arts PRN challenging your observation skills. How many details can you notice? Can you weave together a story from this one still image? Don’t forget to check out more series featured on Arts PRN here.

A big thank you to Dr. David Cisewski (@dhcisewski), an EM resident at Mount Sinai, for suggesting this painting for Arts PRN!

What is the focus of this painting? How do you know?

Through the use of lighting and perspective, this painting brings to attention the man on the bed. Not only is he the most well lit in the painting, but his angular pose sharply contrasts the soft curves of those around him. 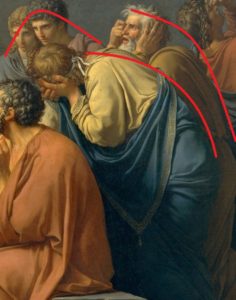 Soft curves of the mourning men.

In the middle of the painting is the chalice, which appears to harmonize the left and right halves. The contents of the chalice do not appear to be innocent, as the man presenting it is turning away, covering his face as if in shame.

What kind of room is this?

There are no decorations in this room. It is dreary and gray. The walls are barren and plain. The shackles on the ground support that this room could be in a prison.

Who was this man? Why do you think so?

We can deduce much about the man on the bed, just by observation. The most distinct feature is the number of young and old men around him. They appear to be in mourning, or distress, over what is happening to the man on the bed. Was he a mentor? Leader? Prisoner? He appears to be engaging the crowd in a talk while pointedly gesturing upwards. 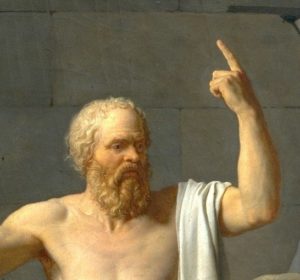 The plot thickens when we notice the shackles on the ground. Presumably, the man on the bed was the one who required them just moments ago, but why does he not anymore? Is there another restriction that is preventing his escape? There is a man in the ocher tunic sitting down and pressing a hand on the mans leg. It appears to not be forceful enough to hold him down, but is almost an affectionate embrace. 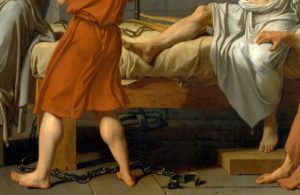 Shackles and the hand touching the mans leg

Who are the figures in the background?

There are three figures in the background, climbing up stairs. The only woman in the painting looks back to the viewer and appears to wave goodbye; her companions are covering their faces. Could this be the mans wife? 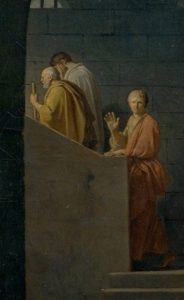 What really is going on:1

This painting is titled The Death of Socrates by Jacques-Louis David and depicts the actual event of the death of Socrates (with some artistic freedom). It is painted from the account of Plato in The Phaedos of Plato.

Socrates was a philosopher trialed, and found guilty, by the Athenian court for corrupting the minds of young men by not recognizing the gods of the city in his teachings. He was given the option to choose to live in exile or to face death. He chose death. In the chalice is poison hemlock who’s active substance is similar in shape to nicotine. It first activates the nicotinic receptor to produce cholinergic symptoms (tachyardia, CNS stimulation, diaphoresis etc) and later by antagonizing the nicotinic receptor producing bradycardia, CNS depression and eventual ascending paralysis.2 The effect of the ascending paralysis could by why he no longer requires the shackles. 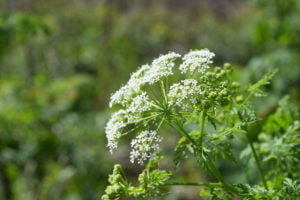 Hemlock, the poison of which was derived to kill Socrates

It is unknown whether Socrates had already drunk from the chalice, or is reaching for it in this painting. He is surrounded by his students, of which Crito (one of his most devout students) is the one seated in the ocher tunic tenderly placing his hand on Socrates’ knee. In the recounting of the event, Plato wrote Socrates as angry at his disciples for displaying such emotional distress at his death. Here, he is depicted lecturing that death is not to be feared. His grand gesture of pointing upwards is an indication that he is talking about the afterlife. Two of his disciples are seen to be stoically listening to this last lesson, while the others cry out. 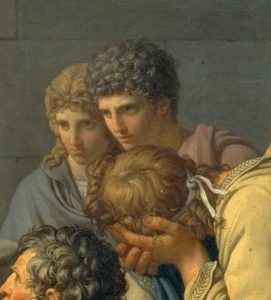 It was written that Socrates even banishes one of his disciples to the arch for displaying emotional weakness. 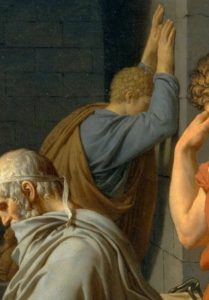 Mourning man that was cast out

The old man to the left foreground is Plato. Plato was not actually present at the death of Socrates and was only a young adult when it occurred. A video essay by Evan Puschak suggests that David depicted Plato as an old man in this particular pose to represent the death of Socrates as a memory. The linearity of the right half of the painting, the perfect lighting, and poses mimic the dream-like perfection of memories. In contrast, to Plato’s right is the real world depicted by accurate perspective, coloring, and realism.3

The Death of Socrates is poignant painting of the event of the philosophers death that balances the dream-like and realistic qualities that stories like these hold.

The Case of the Man with the Red Hat

The Case of the Woman and the Flask

What happened to this woman?