After a quick read of the abstract I was like this: 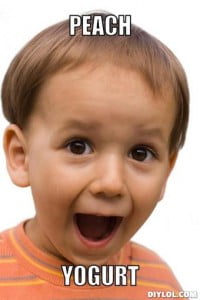 A way to adjust the D-Dimer that preserves sensitivity while increasing specificity? That sounds MORE awesome than peach yogurt! Fewer negative CT’s would only be a good thing as noted in the latest PE updates I listened to on ERCast and EM:RAP.

The proposed cut-off was initially derived by one of the authors (Douma 2010) who retrospectively analyzed 4 prospective studies of low-risk PE patients to derive and validate an elegantly simple DDimer age adjustment: 500 for those <50yo and age x 10 thereafter (ie 58 = 580, 82 = 820). The data from the validation studies was presented in a somewhat unconventional way (no calculated sensitivity/specificity with confidence intervals), but they found an absolute reduction of false positive results of 5.1% and 6.2% in each validation cohort with a very small number of false negatives. The study concluded by calling for its results to be prospectively validated.

This meta-analysis was a follow-up to that study. Unfortunately, after reading it I was more like this: 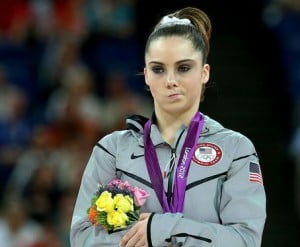 But in a substantially more masculine way (I hope).

The study population seemed fairly representative of our ED patients. It included 13 cohorts (12 prospective) that totaled nearly 12,500 patients with suspected DVT (6 cohorts) or PE (7 cohorts) of “non-high” clinical probability (as per one of Revised Geneva/Wells DVT/Wells PE/clinical gestalt <80%). The majority of these presentations were to the ED although 1 DVT cohort included family medicine presentations and 2 PE cohorts included both inpatient and ED presentations.

The gold standard for ruling out DVT or PE in 12/13 of these low-risk cohorts was 3 months of event-free follow-up. This is reasonable considering the majority of the cohorts were relatively low-risk and had negative D-Dimers. The data from each cohort was obtained from the primary sources, stratified by patient age and reanalyzed using the age-adjusted D-Dimer cut-off.

After reading the study I think an understanding of clinical heterogeneity in meta-analyses is important to interpret it appropriately. David Newman did a spectacular piece on this topic in this month’s episode of EM:RAP. He noted that when studies look at different things (populations, diseases, etc) they should not be combined in a meta-analysis. He used this stroke publication as an example of a meta-analysis that combined heterogenous data (ie: studies where the inclusion criteria was mutually exclusive). I think the value of this study is entirely dependent on whether or not you believe that presentations with possible DVT and PE are clinically homogenous.

I would argue that patients presenting with possible DVT are related but different than those presenting with possible PE. While their assessment certainly overlaps, the decision to order a D-Dimer is made based on different variables. Additionally, it is feasible that the age-adjusted cut-offs could work better in either DVT or PE and lumping them all together like this obscures that relationship.

For that reason, I think its difficult to say whether the results of this meta-analysis should make you more confident using an age-adjusted D-Dimer value to rule out PE, DVT or both. If you buy this argument you’re better off passing on this study and reviewing previous publications by the same authors. Their 2012 DVT study came to relatively similar conclusions (8.6% absolute reduction of false-positive D-Dimers) as the 2010 PE study discussed in the introduction (5-6% absolute reduction of false-positive D-Dimers).

One obvious criticism of this meta-analysis is that the 1721 patient cohort used to derive the rule in the initial 2010 PE study were included in this validation meta-analysis. The inclusion of derivation data in a validation study is somewhat naughty as it would bias the meta-analysis towards a favorable result.

Moving past these issues, the study results supported the use of an age-adjusted D-Dimer. While this adjustment increased the specificity of the D-Dimer by a statistically significant amount in all age brackets the sensitivity only dropped a few points (~97-99% in each age bracket and 98.4% pooled – not significantly different).

For this exercise I used a patient with a Wells PE score of 4 (a moderate or “non-high” risk score) resulting in a pre-test probability of PE of 16.2%. As I wanted to look at a “worst case” scenario, the lower confidence interval values of sensitivity and specificity for the conventional and age-adjusted D-Dimers were compared.

These calculations suggest that the “worst-case” age-adjusted D-Dimer cutoff was still sensitive enough to lower the post-test probability below the test threshold for PE.

Despite the criticisms I have for this study I think its results still support the move towards an age-adjusted D-Dimer cut-off for both DVT and PE. I put on my “not impressed face” for the combined analysis of DVT/PE and the inclusion of the cut-off’s derivation cohort, but the results of this large meta-analysis still suggest that we should be moving in that direction. In the end, I could have just stuck with Chris Bond‘s twitter comment that paraphrases the conclusion of all 3 of Dr. Doumas’ recent meta-analyses:

@BoringEM@ERmentor@jameslhuffman I think most are still awaiting a prospective study on this. But higher cutoff for preg and older makes sense

On an unrelated note, this critical appraisal style of post was a bit of a departure from the usual for me. In my fellowship year I am concentrating on developing my critical appraisal skills and will likely analyze more articles like this. Discussions of pre/post-test probability and clinical heterogeneity certainly fit my “Boring” criteria. I’d greatly appreciate any comments as I try to improve.

Thanks to Nadim Lalani and Teresa Chan for their peer review of this piece. It led to a massive overhaul of this post.