This episode of CRACKCast covers Rosen’s Chapter 124, Acid Base Disorders. This chapter covers a simple approach to acid base disorders and ABG interpretation, including the differential diagnosis for the identified disorders & treatment options.

Patients with an acute severe metabolic acidosis rely on a robust respiratory compensation; in these cases, the adequacy of the ventilatory response should be assessed and augmented, with non-invasive or invasive ventilation, if needed.

Many basic cellular processes are sensitive to small changes in serum pH; the kidneys, lungs, and physiologic buffers determine serum pH, which is normally between 7.36 and 7.44. Serum pH is determined by the relative concentrations of bicarbonate (HCO3) and carbon dioxide (Paco2) = [1.5 × serum HCO3 − ] + [8 ± 2]; when two of these variables are known, the third may be calculated. Most blood gas analyzers measure pH and Paco2 and report a calculated [HCO3 − ].

Key thought process: Is this a simple ABD or a mixed ABD?

Often, acid-base disturbances are first identified when the results of laboratory tests ordered to evaluate the patient’s symptoms demonstrate alterations in the bicarbonate level, pH, or Paco2. The possibility of an acid-base disorder is suggested by clinical events such as toxic ingestions, severe vomiting, or diarrhea, as well as in patients with diseases primarily affecting the lungs and kidneys. All critically ill patients and all patients being mechanically ventilated should have an assessment of their acid-base status. When an acid-base disturbance is identified or suspected, elucidation of its underlying cause(s) is central to appropriate management.

Painful arterial blood sampling is unnecessary for the evaluation of acid-base disturbances. Paco2, HCO3−, and pH values taken from peripheral venous, central venous, intraosseous, and capillary blood are all suitable for acid-base assessment.

[1] Describe an approach to acid-base problems

If you’re serious about getting better at this, just go check out: https://lifeinthefastlane.com/investigations/acid-base/

There are a bunch of very helpful worksheets on this site, including the 1-2-3-4-5 rule for determining if there has been an adequate metabolic compensation for resp. acidosis/alkalosis.

But here’s the approach from LITFL: (and a worksheet from them below)

Interpret the ABGs in a stepwise manner:

1. Determine the adequacy of oxygenation (PaO2)

*Whether an appropriate respiratory compensation to a metabolic acidosis has occurred can be approximated by comparing the Paco2 to the last two digits of the serum pH.

In a primary metabolic acidosis with appropriate respiratory compensation, these two values should be similar; that is, a patient with a serum pH of 7.20 should have a Paco2 of 20 mm Hg.

If the serum pH is 7.17 and the Paco2 is 30 mm Hg, the respiratory compensation is less than expected and a primary respiratory acidosis is present. This is commonly seen in patients whose dominant condition causes a metabolic acidosis but also impairs respiration, such as sepsis.

Conceptually, calculation of the delta gap tried to determine whether the anion gap is accounted for by the change in serum bicarbonate concentration. In patients with an elevated anion gap and a delta gap greater than +6, meaning that the serum bicarbonate level is significantly higher than would be predicted by the number of unmeasured anions, a metabolic alkalosis in addition to a metabolic acidosis is likely to be present.

This is commonly seen when the dominant acidosis condition causes severe vomiting (eg, diabetic ketoacidosis). In patients with an elevated anion gap and delta gap more negative than −6, meaning that the serum bicarbonate level is significantly lower than expected given the anion gap, a normal anion gap metabolic acidosis is likely be present in addition to the elevated anion gap metabolic acidosis. This is usually seen when a lactic acidosis complicates severe diarrhea. 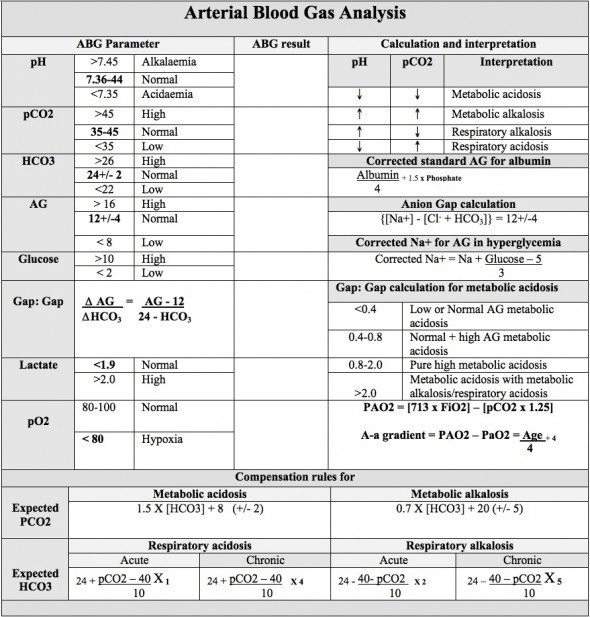 It is the ACUTE resp. acidosis that kills! Restore oxygenation and ventilation STAT while you find the cause!

A way of thinking through the DDx:

It is thought that spontaneous respiration cannot sustainably reduce Paco2 beyond 10 to 12 mm Hg, which is the appropriate compensatory respiratory alkalosis for a metabolic acidosis that drives the pH down to about 7.10.

After 3-5 days…an appropriate metabolic compensation for respiratory acidosis is an increase of approximately 3.5 mEq/L in the serum HCO3− concentration for every increase of 10 mm Hg in Paco2. A patient with chronic respiratory disease resulting in a baseline Paco2 of 60 mm Hg would therefore be expected to have a serum bicarbonate level of approximately 30 mEq/L and a slight acidemia, because without another primary acid-base abnormality, correction is never to a normal pH.

Thermia (morbid finding), confusion, and a variety of metabolic derangements, ultimately leading to seizures, coma, and cardiovascular collapse. Chronic salicylism, however, is notoriously subtle in its presentation and occurs in older sicker patients who seemingly have more likely explanations for their symptoms. Salicylate toxicity should be strongly considered in these patients, as well as those with an unexplained respiratory alkalosis.

Metabolic alkalosis occurs from loss of H+ or retention of HCO3− It is usually a consequence of prolonged vomiting or nasogastric suction or a compensation for chronic respiratory acidosis. The differential diagnosis includes a variety of predominantly endocrine and electrolyte disorders

Common unmeasured anions that cause an elevated anion gap include:

Aka this is known as “KULT”

According to Rosen’s: The causes of elevated anion gap metabolic acidosis are classically remembered by the mnemonic MUDPILES; however, it is more useful to focus on the identity of the unmeasured anion (Box 116.3).

For example, if the cause of an elevated anion gap metabolic acidosis is found to be lactate or ketones, the next step is to determine the cause of lactatemia or ketonemia.

*Patients with AKA may demonstrate a high anion gap, but a mixed acid-base disorder may be present due to concomitant ethanol withdrawal, which may cause a respiratory alkalosis and metabolic alkalosis from vomiting. As a result, the serum pH can be acidemic, normal, or Alkalemic. A urine dipstick can detect acetoacetate but not β-hydroxybutyrate; this causes an apparent worsening ketonuria as the patient metabolizes β-hydroxybutyrate to acetoacetate, although the patient is actually recovering. The treatment of AKA is dextrose-containing fluids; insulin is contraindicated.

Inability of tissues to use oxygen from cellular poisons

* As the parent compounds are converted to their toxic metabolites, the osmol gap closes, and the anion gap widens.

Serum albumin accounts for most of the physiologic (normal) anion gap, usually between 9 and 15.

In addition to albumin, classic unmeasured anions such as lactate and ketones can also be measured and incorporated into a diagnostic pathway. For example, a lactate level of 4 mEq/L can be presumed to account for an anion gap of 16 mEq/L, but not an anion gap of 25 mEq/L; in this case, other unmeasured anions should be sought. Unmeasured cations are also present and may account for an elevated anion gap in a case of hypomagnesemia or hypocalcemia, often in combination with hypokalemia.

This is much less life threatening than elevated AGMA!

Most cases encountered in the emergency department (ED) are caused by gastric loss of bicarbonate in the setting of diarrhea.

Overall, a normal anion gap does not exclude clinically significant acidosis or high concentrations of unmeasured anions. Direct measurement of compounds that often produce an elevated anion gap (eg, lactate, ketones, toxic alcohols) should still be pursued when there is clinical concern, despite a normal anion gap.

This is a list in the text, so it’s good to know!

So what to do??….administration of sodium bicarbonate is unlikely to be beneficial in most cases of acidemia caused by endogenous acid production (eg, lactic acidosis, ketoacidosis), sodium bicarbonate therapy is theoretically more attractive for conditions in which the underlying problem is bicarbonate loss, which generally causes a hyperchloremic or normal anion gap metabolic acidosis, or impairment of acid secretion, such as renal failure. Many of the acidosis syndromes caused by exogenous toxins (eg, aspirin, tricyclic antidepressants) call for bicarbonate as a specific therapy; these cases are distinct from the empirical use of bicarbonate to treat the acidemia itself. Bolus dosing of hypertonic (8.4%) sodium bicarbonate is ineffective and should not be used to treat hyperkalemia.

Hyperkalemic patients (especially if acidemic) may be treated with an isotonic sodium bicarbonate infusion, as described above. Acidemia causes hyperkalemia as H+ is brought into cells in exchange for K+.

So, as long as you’re not just “treating” the acidosis with bicarb (i.e. you know the cause and are addressing it as well) bicarb may be a reasonable choice for the conditions mentioned above (Tox, renal loss, renal failure).

Although it is commonly recommended to treat a serum pH less than 7.1 with sodium bicarbonate (1 mEq/kg),17 we believe that best evidence currently supports withholding bicarbonate therapy as an empirical treatment for acidemia in favor of treating its underlying cause.

An iso-tonic bicarbonate drip is prepared by adding 150 mEq sodium bicarbonate (three crash cart ampules, which are usually 50 mL of 8.4% solution) to 1 L of 5% D5W, infusing as slowly as the clinical situation permits (eg, 75–200 mL/hr). Sodium bicarbonate should generally not be added to normal saline because of concern of hypertonicity.

Winter’s equation (Paco2 = [1.5 × serum HCO3] + [8 ± 2]) can be used to calculate the expected arterial Pco2 for the serum bicarbonate level. If the Pco2 is higher than expected, the patient may be fatiguing and require ventilator support.

Elevated concentrations of unmeasured cations may cause a low anion gap (<3 mEq/L), such as in cases of:

Other causes: think about what else the anion gap usually includes to be in the 6-12 range: unmeasured anions such as albumin, sulfate, phosphate, and citrate. So, isolated depressions of these may cause a low anion gap.

Hypoalbuminemia would be such a case.

[2] BONUS: Why do patients with hyperventilation have lip and extremity paresthesias, carpal pedal spasm, muscle cramps, lightheadedness, and syncope?

The classic paper bag technique to cause rebreathing – works through the placebo effect, rather than changing PaCO2 – and has risks associated with it.