This episode of CRACKCast covers Rosen’s Chapter 88, DVT and PE. This episode covers the risk factors, diagnostic approach, treatment and management of PEs and DVTs.

Now lets jump into each of these diseases….

3) How is the d-dimer test used in the diagnosis of DVT?

So, you’re wondering if this is a DVT….good for you!

The symptoms of DVT can be very subtle and nonspecific (cramping, sensation of fullness in the calf)

****the lack of objective swelling is an unreliable gestalt tool to exclude the diagnosis of DVT!****

D-dimer (protein breakdown product of cross-linked fibrin breakdown = i.e. Clot has formed somewhere in the body in the last 72 hrs)

5) What are the Wells criteria for DVT? Describe how to use this score.

Wise gestalt (including past hx of DVT!)

After my exam writing is done, I’m probably not going to use Wells score…..

DVT and no other clear DDx? → risk stratify as unlikely / likely DVT →

7) How is a proximal lower limb DVT managed?

8) What are the common causes of upper limb DVT? 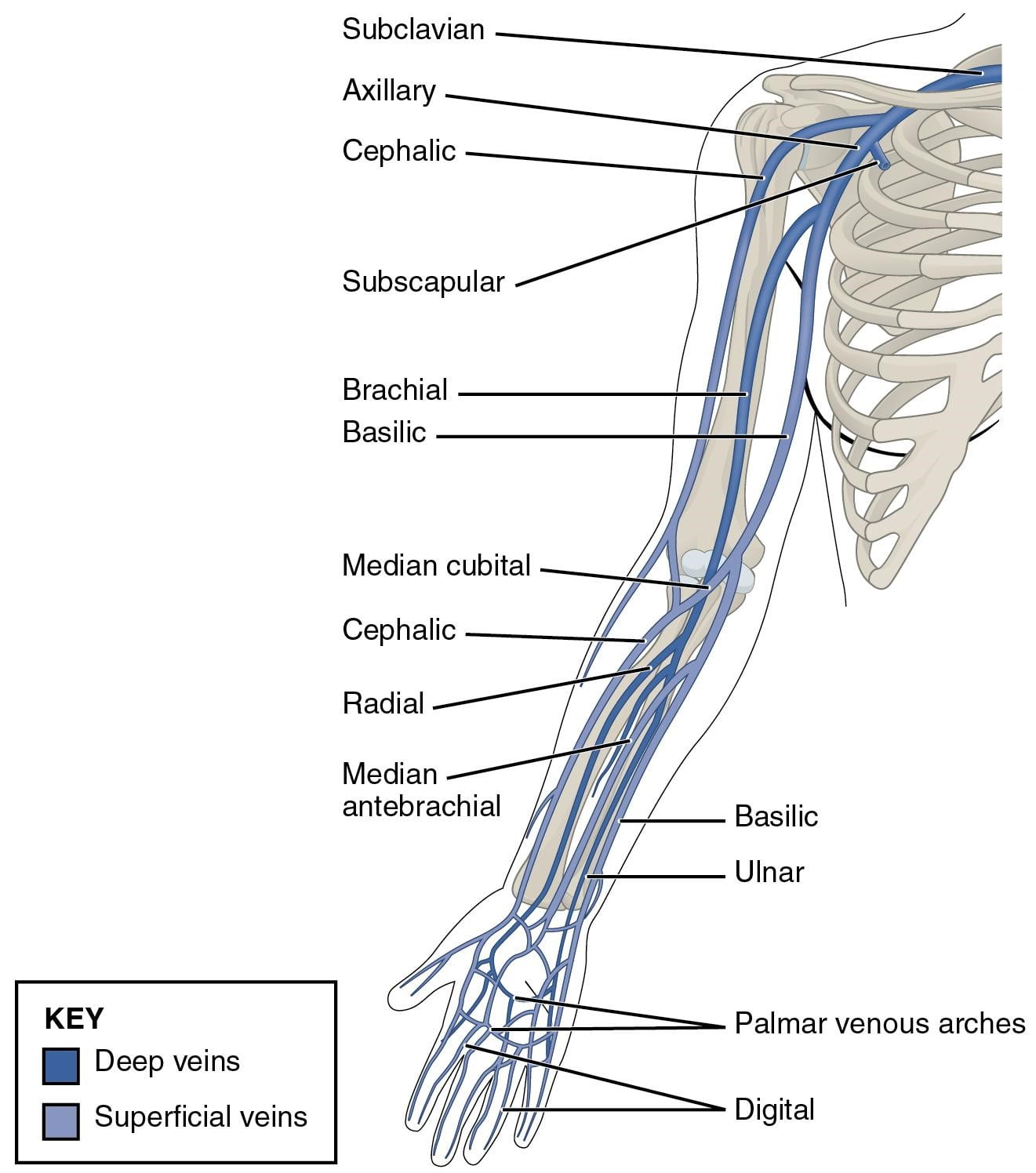 9) How are upper limb DVTs managed?

At similar risk of PE, so is treated like a lower extremity DVT

Remember, that we not only treat DVT’s to prevent PE’s, but ALSO because DVT’s damage the valves of veins – which can lead to venous insufficiency (see prev. chapter). This can become a chronic disabling disease!

Now, we’re moving on to PE’s

Every PE has its birth as a DVT somewhere in the body, which migrates to the lungs.

These are the ones that are highly associated with PE in the ED population:

Notice that smoking is NOT on that list! Smoking does not seem to increase the risk for PE compared with another patient who is a non-smoker with the same clinical presentation.

Remember, just like in cardiac disease these are epidemiologic/population risk factors and the abscence of them in a patient who has symptoms of a PE cannot be used to exclude the diagnosis!

Many symptoms are nonspecific in PE, and the suddenness of the onset of symptoms neither increases nor decreases the risk of PE.

Temp > 38.6 is more suggestive of pneumonia than PE.

***as many as 50% of people diagnosed with a PE have no identifiable risk factors for thrombosis!***

These tests are more useful for finding alternative diagnoses to a PE, than confirming the diagnosis of PE

13) What are the Wells criteria for PE? Describe how to use this score.

Now, let’s dive into risk scoring. Just like DVT we need to use our rational decision-making to guide our diagnostic process. So, start with the Pre-test probability. The Well’s score is an explicit tool, but an implicit/gestalt guess can be used. (Both seem to be similar in estimating pre-test probability)

If the risk is deemed to be > 2.5% then testing to rule out PE is indicated. 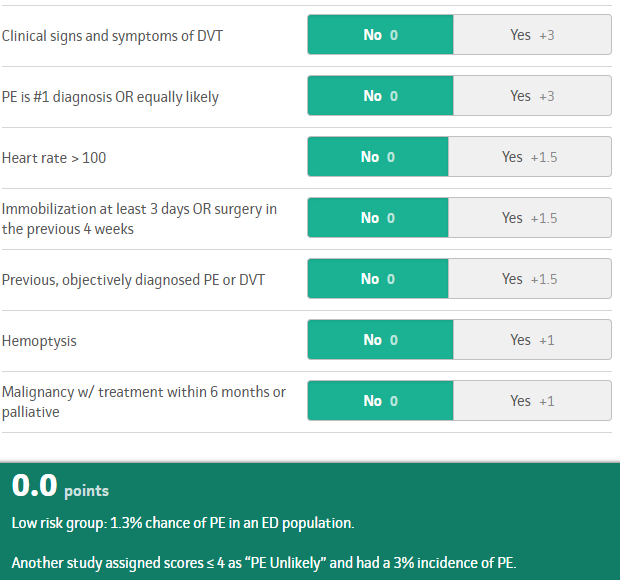 For a great discussion on using the two tier or three tier approach.

For people with a risk > 2.5%, Rosen’s suggests we divide pts. Into two groups (this is the recommended two tier approach):

This slick tool, can help us identify the VERY low risk population (risk <2%).

Only useful if the clinician deems the patient to be low risk!

Then if all the 8 features are satisfied, you can no longer work up for PE!

If patients have some of these risk factors, but NO chest pain / SOB / Dyspnea / SOBOE / syncope / and normal vitals – they probably don’t need a workup for PE! 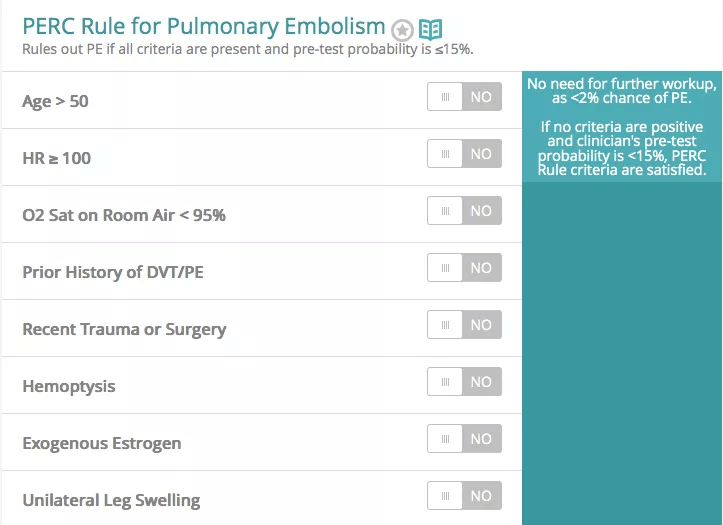 15) Which imaging tests can be used to diagnose PE? List advantages and disadvantages of each.

16) List indications for thrombolysis in PE, what is the risk of ICH?

17) What are the absolute and relative contraindications?

Absolute or major contraindications to systemic thrombolytic therapy in acute PE include an intracranial neoplasm, recent (ie, <2 months) intracranial or spinal surgery or trauma, history of a hemorrhagic stroke, active bleeding or bleeding diathesis, or nonhemorrhagic stroke within the previous three months.

Those patients with severe hypotension and a contraindication to fibrinolysis should be referred to see a vascular surgeon for embolectomy.

18) List markers of poor prognosis in patients with PE.

Rosen’s states that 8% of patients with a PE in the ED will die within 30 days.

1) What is phlegmasia cerulea dolens? How is it managed?

2) Which patients should have an IVC filter?

3) What about PE/DVT in pregnancy?

Hypoxia: due to V/Q mismatch. Areas of the lung that are ventilated (dead space) not being perfused.

“Effort thrombosis, or Paget-Schroetter Syndrome, refers to axillary-subclavian vein thrombosis associated with strenuous and repetitive activity of the upper extremities. Anatomical abnormalities at the thoracic outlet and repetitive trauma to the endothelium of the subclavian vein are key factors in its initiation and progression. The role of hereditary and acquired thrombophilias is unclear. The pathogenesis of effort thrombosis is thus distinct from other venous thromboembolic disorders. Doppler ultrasonography is the preferred initial test, while contrast venography remains the gold standard for diagnosis. Computed tomographic venography and magnetic resonance venography are comparable to conventional venography and are being increasingly used. Conservative management with anticoagulation alone is inadequate and leads to significant residual disability. An aggressive multimodal treatment strategy consisting of catheter-directed thrombolysis, with or without early thoracic outlet decompression, is essential for optimizing outcomes. Despite excellent insights into its pathogenesis and advances in treatment, a significant number of patients with effort thrombosis continue to be treated suboptimally. Hence, there is an urgent need for increasing physician awareness about risk factors, etiology and the management of this unique and relatively infrequent disorder.”