This episode of CRACKCast covers Rosen’s Chapter 61, Mammalian Bites. From dogs to seals, this episode covers a solid chunk of the pathogens, risk factors for infection and first line treatments for a number of different bites that you may encounter in your ED.

Can be a big problem: Dogs can bite down with over 310 pounds of force. Dog bites most common domestic animal bite; cats are second

The breeds most frequently responsible for fatalities include Pit Bull (59%), Rottweiler (14%), American Bulldog and Siberian Husky (5% each), and German Shepherd Dog (3%)

Bites can damage all sorts of tissue and structures: Watch out for head and neck injuries in children less than 4

NOTE: Pasteurella multocida likely has been overstated as a primary causative pathogen

3) What first line antibiotic is a good choice for cat and dog bites?

4) What species are known to cause infection with Pasteurella multocida?

5) What are the risk factors for infection with animal bites? 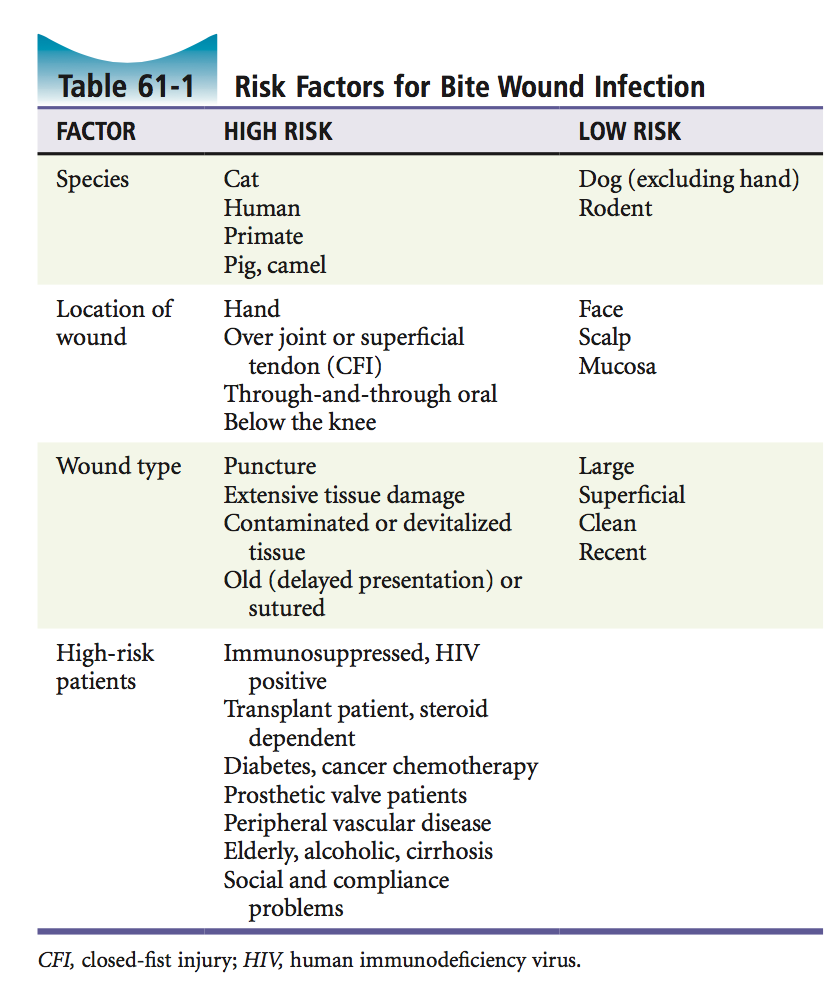 6)  Describe the treatment of monkey bites 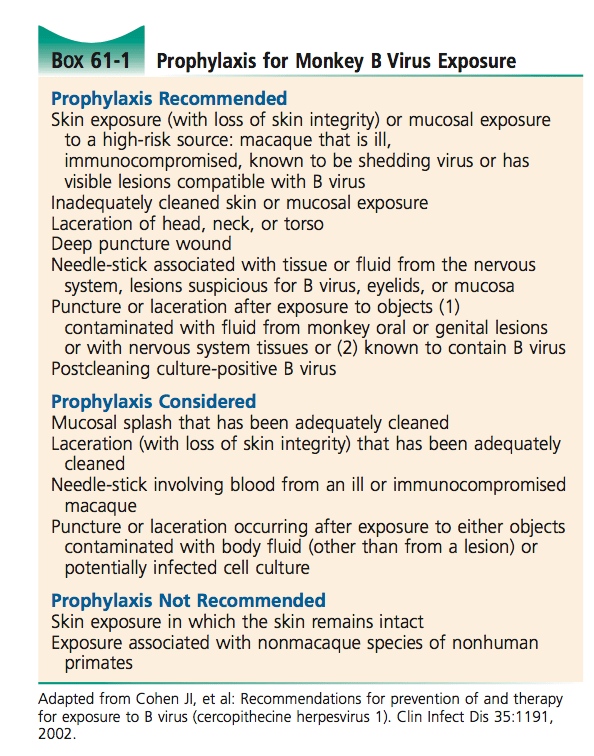 1) What about seal bites?

It’s authored by the one and only Dr. McDreamy! (Dr. Colin White)

Punch line: Mycoplasma phocacerebrale can mess you up! Don’t forget about possible Vibrio vulnificus infection as well.  Mycoplasmas lack a cell wall, the major site of action for beta-lactam antibiotics. No cell wall, no worky worky, no good for seal finger.

2) What about rabies in BC?

“Epidemiology of rabies in BC: The only known reservoirs for rabies in BC are a number of bat species. Because of altered behaviour, infected bats are considered more likely to come into contact with humans and subsequently be tested. Between 4 and 10% of the bat specimens sent for testing to the CFIA are positive (1). It is estimated that less than 0.5% of bats are actually infected.

A wildlife survey in Delta (prior to 1989), following the isolation of the skunk strain rabies in a beaver, intense testing of cats following the Delta incident as well as a study examining raccoons indicated that the skunk and other specific strains of rabies are not enzootic in BC.

Human cases of rabies in Canada are very rare. In BC, there has only been 1 human case diagnosed since 1983: an adult male who died of bat-variant rabies in 2003 (2).” 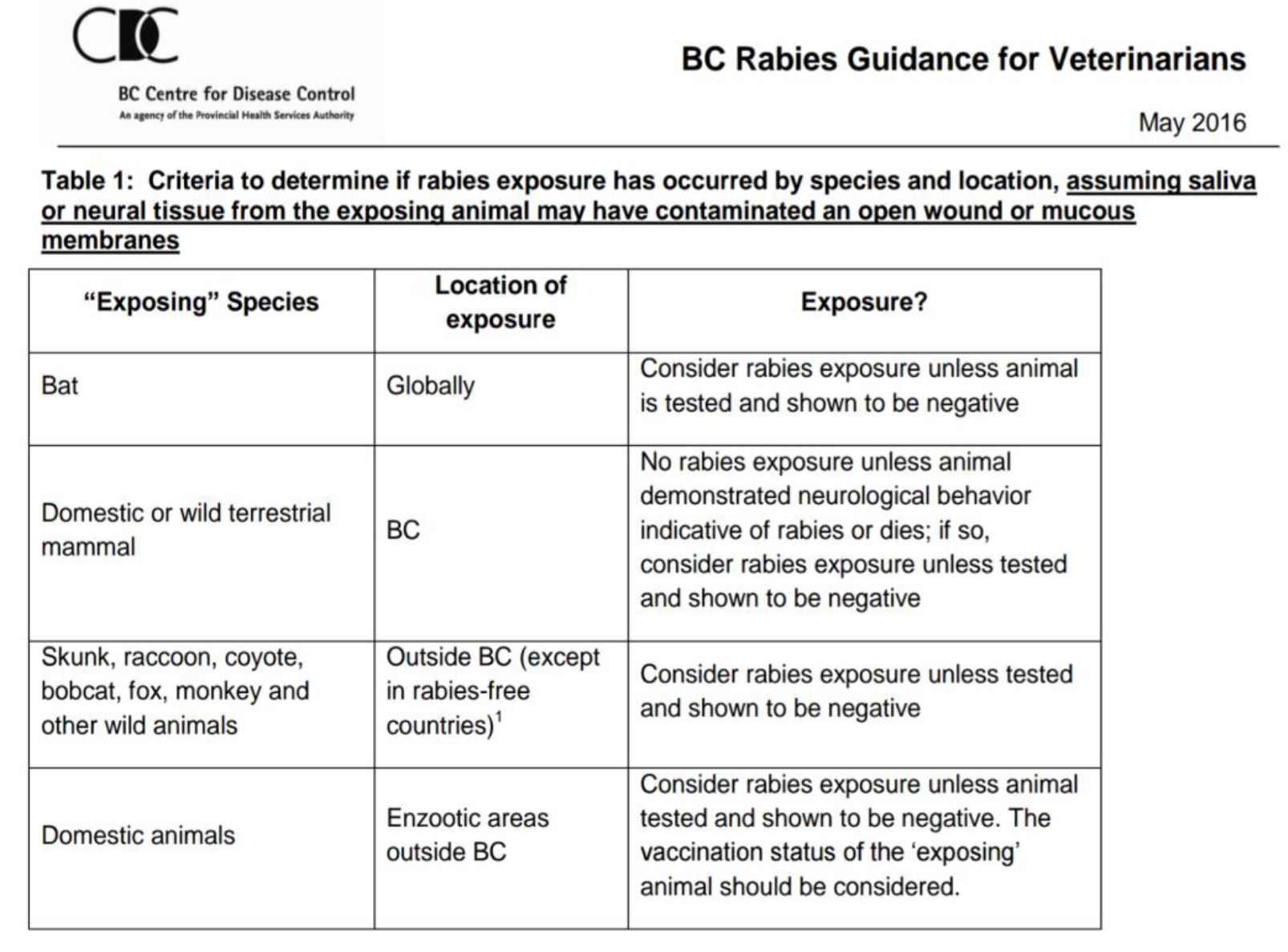 Adrenal hemorrhage from overwhelming sepsis: this is BAD! Super high mortality rates. (30% overall, with 70% of these deaths in immuno compromised)

If you see gangrene at the site of a cat or dog bite, think about this. These patients can get SICK. DIC, renal failure, refractory hypotension. You can get metastatic endocarditis and meningitis.

Replace steroids early (eg Hydrocortisone 50-100mg IV Q6hrs). Look for adrenal hemorrhage on CT: not very sensitive. Cultures can be negative, even after 14 days of running the plates. Think about running a PCR for C. canimorsus

This episode was edited and uploaded by Colin Sedgwick (@colin_sedgwick)