In the movie the Matrix, Morpheus gives Neo a choice: either take the red pill, or the blue pill. What Neo never considered, was that perhaps he shouldn’t take any pills. 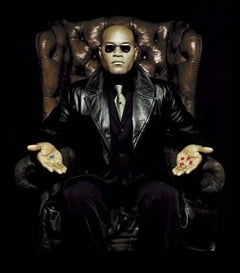 In a bid to combat the exploding epidemic of narcotic abuse and addiction, the government recently chose to stop public funding for OxyContin and instead opted to fund a new alternative called, coincidentally enough, OxyNEO. The theory sold by the drug company to the government is this: the new formulation of OxyNEO makes it much more difficult for drug addicts to crush or liquify, thus prohibiting the drug from being easily snorted or injected.

On the surface, that sounds like a tremendous step forward, especially since oxycodone use (and by proxy, abuse) has soared 80-fold since its introduction in 2000. As taxpayers, we have spent almost half a billion dollars subsidizing prescription oxycodone ($77.7-million alone in 2010-2011). Sounds like an awful lot of money, considering it doesn’t even really saves lives.

Don’t get me wrong, strong opioids like OxyContin are very effective at suppressing pain sensation in your central nervous system. But they don’t save lives. The problem is, when people start getting addicted to the euphoric effects that accompany these drugs, their system develops a tolerance – and once the steady supply is gone, the withdrawal symptoms kick in. They feel like they are going to die. But they won’t, at least not from opioid withdrawal.

You hear sad stories of family members going bankrupt by giving all their money to these addicts because they cannot bear to see them in pain. They constantly abuse the medical system in their attempts to get more prescriptions and access to these pain killers, whether it’s double-doctoring or repeated visits to the ER “because the family doctor is away”. Every single shift I worked this past week, I had to deal with patients who presented to the ER with the underlying purpose of getting painkillers – and they take up a lot of time, often delaying care for the other patients in the department.

But like most drug/substance addictions, the solution is not in choosing which poison to take. Are we truly naive enough to think that OxyNEO will cure opioid addictions? There is nothing stopping a determined addict to continually abuse these pills orally; or to turn to a host of many other alternatives such as hydromorphone or even heroin. The correct approach probably involves behavioural treatment and intervention modalities (akin to methods used in alcoholic detox centers), but less so on medication formulation.

The question then, is not which pill to choose. Much like how Neo found out in the Matrix after taking the red pill, the question is how we should deal with the consequences.