I just returned from a marathon week at CAEP13 (the Canadian Association of Emergency Physicians Annual Conference). While it was my 5th consecutive year of attendance, it was the first time that medical social media was on the radar with a twitter hashtag designated and presentations by at least one FOAMite (Ken Milne). I was excited to see how this would affect the conference as compared to the previous 4 CAEP’s that I attended. In the end there was some bad, some good and some optimism for the future.

From a conference perspective, I thought social media could have been incorporated much better. Some recommendations for CAEP14:

While there was much to improve on, I was happy to see some uptake of social media at the conference. I think these baby steps are moving us in the correct direction! Maybe someday CAEP will be as exciting as the conferences in David Marcus‘ mind

My own Live Tweeting

I was disappointed in my first attempt at live-tweeting an event. I attended the conference with the intention of doing so for the @ALIEMconf handle (if you enjoy live-tweets from EMCC conferences this handle is a MUST follow!). However, I was not able to tweet nearly as much as I had hoped. Leaving early, getting tied up by my own presentation, attending a bunch of meetings and an inability to pass up a few key networking opportunities left me missing some solid sessions. My apologies to Michelle Lin and the rest of the ALIEM crew for not doing a better job! I’ll definitely make it up should the opportunity arise in the future.

As a conference CAEP seems to focus primarily on research and its role as a national meeting for emergency physicians. Many of their non-research tracks focus on CanMEDS roles outside of the medical expert realm such as administration and education. While these are important and I hope they are maintained in future conferences, I wish there was more of an effort to provide exceptional edutainment on core medical expert content. Based on the response that Ken Milne’s presentation received, I think many of the other attendees would agree that this is what they are craving. Here’s a picture of the crowd overflowing into the lobby:

While CAEP will never be Essentials, Canada has some exceptional educators and I think they deserve a track to do what they do best.

On the day prior to the conference opening ceremonies I attended a “Consensus Conference on Medical Scholarship” hosted by one of my research collaborators, Dr. Jonathan Sherbino. The large group at the meeting provided feedback on a group of educators’ definition and vision of educational scholarship. In general, I agreed with the vision of the group. As I looked down their list of the requirements for the highest level of medical scholarship I noticed that FOAM met all of them except one: peer review. Oh peer review, we meet again (see previous posts A Commitment to Pre-publication Peer Review, Arguments for a Journal of FOAM, FOAM: A Market of Ideas and Crowdsourced Instantaneous Review: The Peer Review of FOAM).

While the wording stayed as written above, the responses made me optimistic that we were moving in a good direction. There seemed to be agreement that while our current system really only involves pre-publication peer review, post-publication peer review should be incorporated. No methods were discussed in any depth. There was concern that things like FOAM result in people being able to post work of dubious quality and call it scholarship. Moving forward, it was acknowledged impact is becoming the most valuable thing in the scholarly world and that internet-based publications with high impact may be valued… If only there were a way to measure that impact. Stay tuned for a follow-up post on this.

While “FOAM” was not in the vocabulary of the majority of the conference attendees, it was insanely rewarding to meet the many people (primarily medical students) who said “hi” as a direct result of this blog. I found it awesome both that my mad ramblings have been useful and exciting that so many future emergency physicians have bought into a new and exciting method of knowledge translation.

Meeting with the rest of the members of the Canadian FOAMed community was awesome. A huge thanks to Ken Milne for hosting Eve Purdy, Chris Bond, Stella Yiu, Todd Raine, Elisha T, Ed Kwok and I for dinner as well as bringing us together for a videocast. I hope watching it entertains you as much as it will likely embarrass me! (I did get to wear a sweet toque though.)

Additionally, the award ceremony made it clear that social media had made a splash. Two of the top awards were given to FOAMites. Ken Milne of TheSGEM took home the Canadian Teacher of the Year Award while I was honoured to receive the FRCPC Resident Leadership Award. While I credit the support, mentorship and opportunity provided by my residency program much more than my blog for the honour, it was great to see two FOAMites receiving acknowledgement. 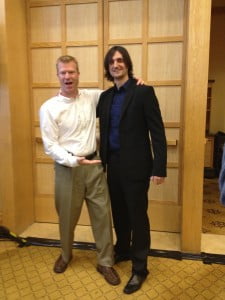 @TheSGEM and after the awards ceremony

All in all, I had a blast at CAEP and look forward to contributing to the conference however I can in the future. I’m quite excited to see how it may evolve now that social media has entered the equation and we have several engaged physicians on the next organizing committee. If you have any ideas for how the conference can be improved for CAEP14, tweet Ed Kwok or Stella Yiu on the Ottawa organizing committee!

Feedback on the Consensus Conference component of this post was received from Jonathan Sherbino.