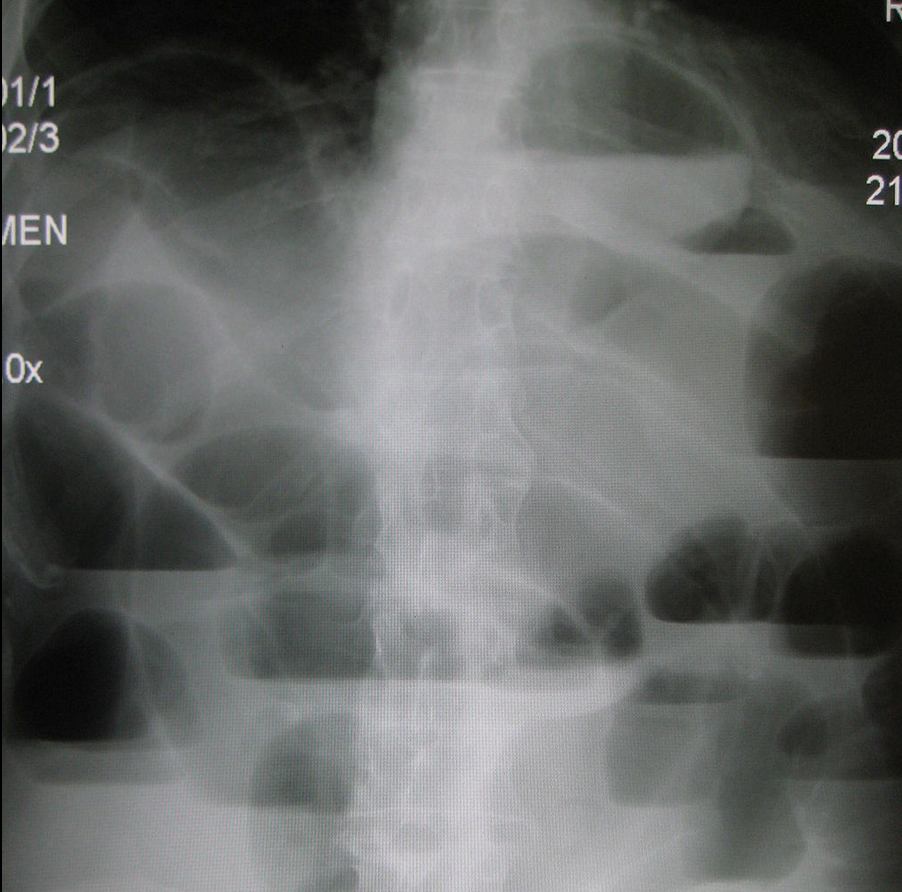 An otherwise healthy 65 year old comes into the emergency department with an 8 hour history of abdominal pain. Her last bowel movement was 3 days ago and she’s not sure if she has passed gas.  She endorses nausea but has not vomited. She has not taken her temperature but does not believe she has been febrile. She’s tried Tylenol for analgesia with little relief. She last ate 12 hours ago and has recently only prepared home cooked meals with no new foods. Her urination has been normal. She has had a number of surgeries including a hysterectomy (1990) and cholecystectomy (1995). There is no family history of colon cancer and she had a normal screening colonoscopy two years ago after an episode of rectal bleeding.

On physical examination, her vital signs were:

On exam, she looks uncomfortable moving around on the stretcher. Her abdomen looks slightly distended, you didn’t auscultate her bowel sounds (see why here) and she has diffuse tenderness of the abdomen but no peritoneal signs. She does not have flank percussion tenderness. The rest of her exam is unremarkable. You wonder:

Boring Question:  How useful are plain abdominal films for a patient with abdominal pain and suspected small bowel obstruction?

Radiographs are also ordered in the emergency department for patients with acute abdominal pain. Flat and upright abdominal films, upright chest films and lateral decubitus views can be used to screen for bowel obstruction, constipation or free air (1). Plain abdominal films may demonstrate air fluid levels which may suggest mechanical obstruction. While these levels may suggest an obstruction, they are not pathognomic for such a condition (2). Plain abdominal x-rays also expose patients to about 35 times the radiation as a dose of a chest x-ray (3).

Using PubMed, three separate searches were performed. These were:

The resulting article titles and abstracts were screened with relevant articles reviewed. In addition, the textbook ‘Tintinalli’s Emergency Medicine’ was used. For investigations highlighted in review literature, the primary studies were assessed.

A study by Van Randen et al in 2011 discussed a multi-center trial for patients with abdominal pain lasting between 2 hours and 5 days (2). Each patient was clinically assessed with physical examination and laboratory blood work, with subsequent supine abdominal and upright chest x-rays (2). This investigation found a positive predictive value of 54% for patients with a bowel obstruction with the clinical assessment and 61% after radiographs (2).

In the late 1990s, Suri et al conducted a small prospective study, comparing abdominal x-rays with ultrasound and CT to diagnose small bowel obstructions (3, 5). The calculated positive likelihood ratio from their findings is 1.54. Maglinte et al in 1996 also attempted to assess the value of CT and abdominal radiographs in patients with suspected small bowel obstruction (3, 6). For abdominal films, the positive likelihood ratio can be calculated to be 1.60 from their findings.

Review by an Attending

Patients suspected of bowel obstruction are a heterogeneous group and include patients that may have ileus, gastroparesis or gastroenteritis. The gas pattern also varies due to severity, level and duration of the obstruction. It should be no surprise, therefore, that the radiographs can be normal in 1/3 of cases [especially in the setting of partial obstructions]. That said, many of these patients could be treated conservatively with 40-75% resolution.

Radiologists look at more than just the presence [and number] of air-fluid levels and dilated loops of bowel –for example “mean differential air-fluid levels”. Most studies use rad-reads in patients known to have bowel obstruction. So the published test characteristics reflect the best possible scenario. So I believe that an emergency-read plain film will probably perform even less favorably than you have described.

However, plain films may still have a role depending on factors such as resource availability. I would be reluctant to advocate for CT-everybody approach given the risk of radiation and the current global trend of spiraling health costs and ED overcrowding. It appears that ultrasound may now also emerging as a potential alternative to CT. I would advocate for a sit-down between EM, surgery and radiology to derive an algorithmic approach to which modality would best serve patient needs in your center.

Jatin Kaicker is a Family Medicine resident at McMaster University.