In the world of medicine, Social Media (SoMe) has arguably made the greatest impact in medical education. What started as scattered simple blog posts on random topics of interest by keen individuals, movements like FOAMed have evolved over the past few years with establishment of robust frameworks for dissemination and active discussion around medical topics (for more details have a look here and here).

But is there more to SoMe beyond medical education?

In Emergency Medicine, the immediate clinical application that comes to mind is SoMe’s potential role in communicating urgent announcements to the public. Take the wildfires in 2011 on Slave Lake, Alta., as an example; flames spread so quickly that the evacuation announcement could not be issued through the city’s usual public warning system (TV, radio, etc). At that time, however, SoMe was not utilized as many officials felt that there was still a large proportion of their population not online – and even if they were, it was unclear which of the many SoMe platforms to focus on.

Fast forward to the devastating wildfires at Fort McMurray, Alberta in 2016. Once again, the speed of the spreading flames limited traditional public communication outlets (local radio stations had to be evacuated), but this time, Twitter and Facebook became many people’s “communication lifeline”. Within 5 years, the popularity and ubiquity of SoMe utilization by the average citizen has made it a much more viable emergency communications platform. In fact, there may be so much more beyond simple communication.

Many successful companies utilizing SoMe have evolved beyond simply disseminating information, or facilitating discussions and interactions online. Companies like Facebook have long realized that the power of SoMe lies in the analysis of how people use SoMe. Real-time data of what people are seeing and doing (ie actively seeking and analyzing user feedback) is one of the most powerful aspects of SoMe. Can this be utilized clinically?

I previously wrote about an actual potential disaster scenario where Twitter provided much more accurate on-site information than our traditional EMS calls. A group of researchers in Australia published a technique, based on data mining tools, for real-time tracking of wildfire perimeters.[1] This was developed using emergency calls, however one can easily imagine similar techniques being expanded to SoMe activity. For example, another group of international researchers analyzed Twitter activity as it related to Hurricane Sandy, and found that:[2]

“…real and perceived threats, together with physical disaster effects, are directly observable through the intensity and composition of Twitter’s message stream. We demonstrate that per-capita Twitter activity strongly correlates with the per-capita economic damage inflicted by the hurricane…”

Academic research into this area has continued to explode, with novel methods such as “triangulating” and narrowing down population of interest within tweets being published.[3] Frameworks for organizing how we approach formal study of SoMe utilization in these situations have been proposed, such as this one by Houston et al:[4] 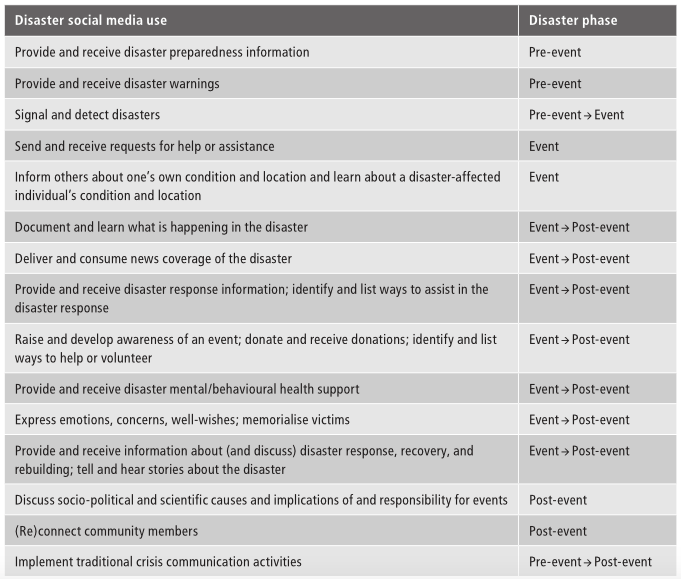 The power of SoMe in emergency medicine is only beginning to be realized, and it involves so much more beyond medical education. We urgently need further rigorous research to help tap into this potential for disaster response and other clinical areas of emergency medicine.

Have you ever utilized SoMe in your clinical work beyond medical education? Please share your experiences and comments below.