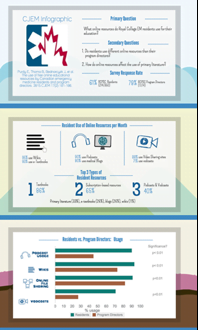 Editor’s note: In this article Eve Purdy discusses lessons learned while performing, writing and publishing research with a team spread across the country. The final product “The use of free educational  resources by Canadian emergency medicine residents and program directors” was published in CJEM in March 2015.  Of note, she (and some of here colleagues) will be available to answer questions via the new CJEM Facebook page in the coming weeks!  – TC

“Hi, I’m Eve Purdy,” I said as introduced myself to a physician at the CaRMS social in Winnipeg.

“Nice to meet you, I’m Joeseph Bednarcyzk,” the doc responded.

And then we both started laughing.

You see, Joe and I had been working together on a paper that was about to be published… Yet, we had never actually met.

Welcome to academic publishing in the 21st century!

Flashback to 2013 where Brent Thoma and I conceived a project over coffee  at CAEP 2013. We knew we shared an interest in how online and open access resources (#FOAMed) affect education and we were “nerding out”. We lamented that despite our gut feeling, there was little empiric support for our gestalt, and no one really knew if these resources were being used as ubiquitously amongst EM learners as we suspected. Being people of action, we decided to tackle the problem…

But first we needed to draft a dream team.

As we sat sipping our lattes, we thought up the best possible roster for our team. What did this project need for success and who could help. Like any team the research unit has multiple roles that need to be filled. The needs we saw and recruited for were:

Fortunately, everyone on our short list said yes! David Migneault (communicator), Joseph Bednarczyk (methods expert) and Jonathan Sherbino (coach) were drafted and the dream team was formed, but there was only one problem….none of us lived in the same city!

When working at a distance you are not going to run into each other in the hallway or in the department, so there might not be that immediate feeling of necessity to complete tasks. Learning to work in geographically disparate teams, however, is likely the future of academic success.  (NB: BoringEM managing editor, Teresa Chan, has recently written about this phenomenon for the ICE blog.)

Collaborating with people you are far from requires an extra bit of discipline. These strategies and use of technology allowed us to be efficient. The publishing date is 2015 which makes it seem like this was a 2 year project however, the actual time from idea conception to completion (acceptance to CJEM) was about 9 months…coincidence? 😉   I think not.

To employ these team management strategies we leveraged a number of technologies to improve communication to facilitate working at a distance.

When considering working on a project at a distance again, there are many things that I would do exactly the same. The team structure and function was gold but some aspects of our workflow could be improved. I would:

I would also suggest that budding academicians consider the publishing time of the journal to which you submit. Our project was completed within six months of starting, accepted within nine months but not published until about two years after we began. Given the nature of the subject matter we studied, this delay compromises the validity of our findings.  We are hopeful, however, that given CJEM’s recent transition to online publication this lag time will be reduced!

I really look forward to sharing a beer with these awesome team members at CAEP 2015 to celebrate our completed work! We hope that this post might clarify what working with a geographically distanced team looks like. So go out, find your dream team and keep progressing the field!

Have questions please ask below!  You can also reach me via the CJEM Facebook page (www.facebook.com/cjemonline) where I will be answering questions about this article in the coming weeks.

NB: The project described in this blog post has been recently published in the Canadian Journal of Emergency Medicine.

View the official CJEM infographic for this paper below!