Pulmonary embolism is a diagnosis that haunts emergency physicians’ nightmares. Its potential deadliness and the variability of its presentation, combined with the potential harms of CTPA’s and overdiagnosis, make assessing it in the low to moderate risk patient devastatingly frustrating. Decades of research have armed us with the PERC Rule, Wells Criteria, Geneva Score, and D-Dimer, but the war is far from over. Some of the latest progress has focused on modifying our use of the D-dimer to maximize specificity while maintaining sensitivity. There is a particular need for this in the elderly population because D-Dimer levels increase with age (PMID:11020391).

Last year I (@Brent_Thoma) reviewed a systematic review and meta-analysis that attempted to validate the age-adjusted D-dimer cut-off (age x 10 in patients >50 years old). While this study showed promise, I had several qualms with it including the merging of data from both PE and DVT studies (the authors also published meta-analyses on these diagnoses separately: DVT PMID:22511491 and PE PMID:20354012) as well as the inclusion of the rule’s derivation cohorts in the validation analysis. My bottom line was that we probably need a prospective study on the age-adjusted D-dimer before it can be applied broadly in practice. In March of 2014 we got one: The ADJUST-PE study. 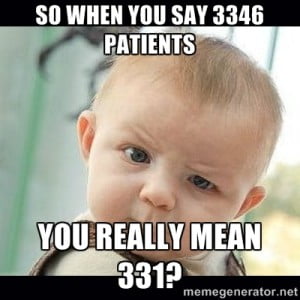 The study was designed to assess the safety of using an age-adjusted D-Dimer, however, the abstract and results focused on the entire population of adult patients. Of the 3346 patients included in the study, only 337 (11.6%) were in the population of interest: those treated based on an age-adjusted D-Dimer (the rest were <50 years old, had a D-Dimer <500mcg/L, had a D-Dimer > the age adjusted cut-off, or were deemed high-risk and evaluated with a CTPA). This represents a 16.9% (6.4% to 23.3%) absolute increase in the number of patients >75 years old that were below the D-Dimer cut-off (this data was not reported for 50-75 year old patients).

Of the 337 relevant patients 6 were excluded because they were started on anticoagulation for another reason, leaving 331 patients. None were lost to follow-up and only 1/331 (0.3%, 95% CI 0.1-0.7%) had a thromboembolic event in the next 3 months while 6/331 died due to other causes (as determined by adjudication). Notably, 3/6 of those patients died from “end-stage COPD.”

The ADJUST-PE study assessed whether or not a negative diagnostic strategy that included an age-adjusted D-Dimer cut-off was able to identify a population at low risk of thromboembolic disease in the next three months.

The major criticism I have of this study is that they did not use the gold-standard test (CTPA) for PE in the population of interest (the 331 patients with a D-Dimer that was >500mcg/L but below the age-adjusted cut-off). Effectively, this study tested the D-Dimer as a prognostic (rather than diagnostic) test because they did not confirm that a negative D-Dimer meant that their patients did not have a PE at presentation – they confirmed that they wouldn’t be diagnosed with a new PE or DVT in the next 3 months. While there is some merit to using 3-month follow-up because it answers an important, patient-centered prognostic question (Is this patient going to have a PE if they are not anticoagulated?), it bugs me because in practice we use the D-Dimer diagnostically (we want to know that the patient doesn’t have a PE! Not that they won’t have a DVT/PE in the future). Further, the prevalence of PE, while high in the entire study population, was not stated in the relevant subgroup (if it was lower, the test would perform better). 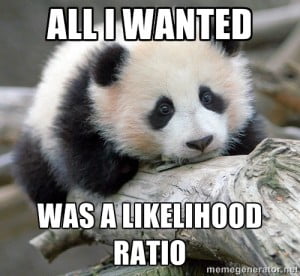 The response to this criticism is that assessing who will have thromboembolic disease of consequence is more important than determining if they have a PE and that any PE’s that were missed were likely small. That is true. However, because they did not perform the gold-standard test we can not say with any certainty that this is the case. Further, we are not able to assess the operating statistics (sensitivity, specificity, +LR, -LR) of the age-adjusted D-Dimer cut-off in comparison to the traditional D-Dimer cut-off because we do not know who has the disease.

Based on above, some potential sources of bias within the study are “double gold standard bias” (the group that tested positive got the gold standard CTPA while those that tested negative got 3 month follow-up), “imperfect gold standard bias” (3 month follow-up is an imperfect gold standard), and verification bias (only those that had a positive D-Dimer got the true gold standard test making it more likely for them to be diagnosed with PE and less likely for the group with a negative D-Dimer). Additionally, the adjudicated declaration that the 6 deaths in the population of interest were not due to PE is suspect because three of them died of “end-stage COPD,” a diagnosis that is likely to be clinically indistinguishable to PE in the charts following the event.

A couple other limitations include the use of two clinical decision tools (Geneva and Wells) and six D-Dimer assays in the study. Although there is data on the clinical decision tools elsewhere and the D-Dimers seemed to have fairly consistent performance, it is difficult to know if the described diagnostic strategy will perform as well as it did in this study in specific scenarios.

This observational study found that an age-adjusted D-Dimer can be used safely as part of a diagnostic strategy in adult patients presenting with suspected PE while increasing the number of patients >50 years of age with negative tests. There is a need for additional prospective studies on this question as this one contained only a small number (331) of patients that were relevant to the study question. While it is not enough to change guidelines, I think it is reasonable to use the data from this study to discuss the risks and benefits of CTPA in patients with a D-Dimer levels below the age-adjusted cut-off and come to a shared decision in some situations.

Salim Rezaie (@srrezaie) of REBEL:EM, Rory Spiegel (@EMNerd_) of EMNerd, Ryan Radecki (@emlitofnote) of EMLitofNote, and Andy Neill (@AndyNeill) of Emergency Medicine Ireland have also discussed this study. In particular, Rory Spiegel’s post is pure gold that is worthy of a read. He digs much deeper into the literature surrounding both the CTPA and DDimer and comes to a much more nihilistic conclusion.

Thanks to Teresa Chan (@TChanMD) and Salim Rezaie (@srrezaie) for reviewing this post.