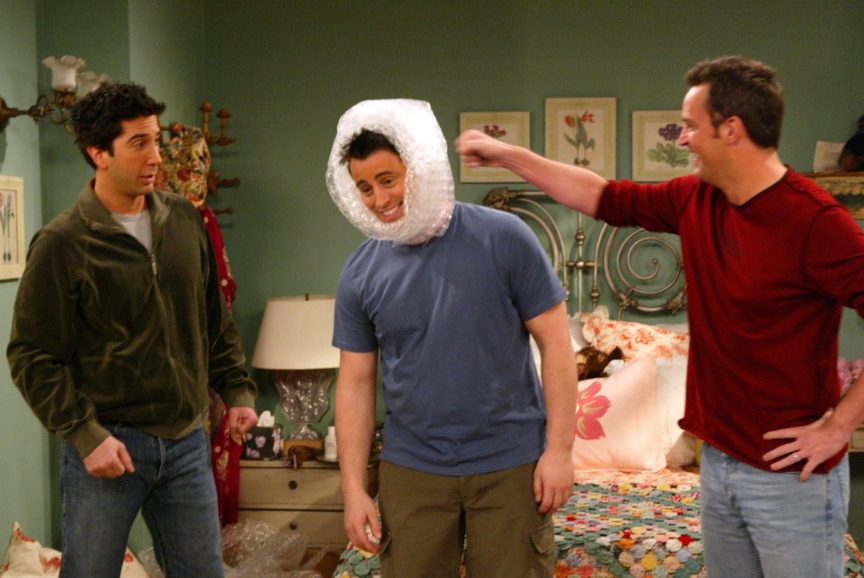 Joseph (Joey) F. Tribbiani is a 31-year-old man who presents with transient tinnitus following multiple hits to the head. Joey received 13 hits to the left and right temporal regions from his “friends” while wearing “protective equipment”. Collateral history from his friends, Chandler Bing and Ross Gellar, indicates that there was no loss of consciousness or subsequent disorientation. However, they were concerned for Joey’s cognitive well-being after losing 57 consecutive coin-tosses under the pretext:

“Heads she wins. Tails I lose.”

Granted, this kind of behavior is at Joey’s baseline as evidenced by his performance on popular game show Pyramid, there remained concerns because he later experienced deficits in short term memory (forgetting his dry cleaning) and emotional stability (attempting to jump off the balcony).

In short, he presents with concerns of cognitive (short-term memory), affective (emotional instability), and somatic (transient tinnitus) symptoms shortly after blunt force trauma to the head.

Traumatic brain injuries (TBI) are characterized as mild, moderate, and severe depending on the patient presentation with respect to: the Glasgow Coma Scale (GCS), the duration of loss of consciousness (LOC), and post-traumatic amnesia (PTA). The World Health Organization (WHO) defines a patient with a mild traumatic brain injury (mTBI) as one that has a GCS of 13-15 (30 minutes after injury) with biomechanical trauma-related disruptions to brain function. These include evidence of: LOC <30min, PTA <24 hours, altered mental status (confusion or disorientation), or other transient neurologic abnormalities.​1​

In this case, Joey has neither LOC, PTA, or altered mental status to suggest brain injury, but he presents with a GCS of 15 and transient tinnitus. He has a plausible mechanism of TBI, as he was struck 13 times on his “improvised helmet,” with ringing of his ears that may constitute a transient neurologic abnormality. There is definitely a possibility of mTBI, but his case poses a diagnostic challenge as his tinnitus subsides within seconds and he remains virtually unimpaired thereafter. It isn’t until he started showing questionable judgement, and irrational behavior that repercussions are suspected.

While cognitive-behavioral impairment is not part of the formal definition of mTBI, it is accepted as corroborating evidence that a mTBI has occurred.​1,2​ As a result, there is reason to believe that Joey may have a mTBI even though the diagnosis remains equivocal.

This report will therefore review the logistics of a mTBI diagnosis and the respective recommended management as they apply to this case.

A mTBI is colloquially referred to as a concussion and the two terms are used interchangeably in literature. A concussion, however, is usually more specific to the cognitive, affective, and somatic sequalae of a mTBI​3​, or the constellation of signs and symptoms that manifests after a minor head injury (Table 1).

Symptoms of concussion/mTBI may present for varying lengths of time and are often self-limited. The average patient takes 7-14 days to recover​5,6​,  but a minority of patients experience prolonged neurocognitive problems beyond 3-6 months (post-concussive syndrome or PCS).​7​ No specific symptoms are diagnostic of a mTBI, although confusion and amnesia are the classic clinical features of a concussion.  If any of the listed symptoms present in a patient after a head injury, mTBI is an acceptable clinical diagnosis in the absence of other psychologic or organic cause. It is worth noting that this is one of many reasons why mTBI are difficult to diagnose because the diagnosis is subject to variable clinical presentations. This results in inconsistencies across studies that aim to define a mTBI.​8​

Mild traumatic brain injuries constitute over 80% of all traumatic brain injuries but are notoriously difficult to diagnose.​9​ The diagnosis of mTBI is firstly complicated with differential diagnoses (intoxication, hypoglycemia, seizures, and underlying psychiatric diagnoses) that can alter GCS and mental status, and it is further complicated by the fact that diagnostic imaging is generally unhelpful. mTBI is therefore largely a clinical diagnosis – making history and physical paramount. Important considerations for history include: (1) C-spine/midline tenderness, (2) mechanism of injury, (3) LOC/PTA, (4) substance use, and (5) coagulopathies (bleeding diathesis), while physical exam includes: (1) Trauma ABCs (2) GCS (3) cranial nerve function, (4) motor/strength sensation (5) vestibular/ocular performance, (6) balance/gait, and (7) mental status to complete a thorough examination.

Ideally, mTBIs are identified while screening for risk factors and/or signs of more severe neurocranial injury. Intracranial hemorrhages (ICH) and cranial nerve palsies, although rare, can manifest in mTBIs, which may necessitate changes in management such as neuroimaging and even neurosurgical intervention. One study showed that in a cohort of 434 mTBI patients 6% had ICH. Older age, lower GCS, and higher energy mechanisms (motor vehicle collisions) were proposed risk factors.​10​ In another study, Coello et al. (2010)​11​ found that in a cohort of 19,800 mTBI patients, 0.3% had cranial nerve injuries with olfactory, oculomotor, and facial nerve injuries being most common. Cranial nerve palsies and ICH are rare in mTBI, but potentially harmful if missed which is why they warrant careful examination.

Not every TBI warrants a CT. Judicious use of CT is important to mitigate unnecessary radiation exposure to patients.​13​ More than 90% of CTs for mTBI do not detect significant brain injury and less than 1% necessitate neurosurgical intervention.​14​ Although CT scans are effective at identifying fractures, contusion, and hemorrhages, they are relatively poor at detecting diffuse axonal injuries, which are far more common in mTBI.​15​ It is therefore difficult to justify the use of CT in mild brain injuries, but the CCHR attempts to clarify objective indications for CT in mTBI patients. The CCHR encompasses 5 high risk and 2 medium risk factors that indicate the need for diagnostic imaging in mTBI patients (figure 4).

The CCHR is 98.4% sensitive and 49.6% specific for clinically important brain injury, but it is contingent on the requirement that the patient presents with a GCS of 13-15 after head injury and sustains a witnessed loss of consciousness, amnesia, or confusion.​16​ While short term memory deficits may constitute witnessed amnesia in Joey, the absence of any of the 7 factors outlined by CCHR would discourage the use of CT for Joey’s case.

Concussed patients are often sent home and subject to 24-hour observation to ensure that there is no evidence of clinical decline. Exceptions are made for patients that are at significant risk of intracranial complications, which may include: (1) GCS<15, (2) significant CT findings, (3) seizures, (4) coagulopathies, (5) neurologic deficits, or (6) recurrent vomiting. These patients may be admitted for further observation.​3​

Patients that are sent home are managed with pharmacologic and non-pharmacologic interventions such as prescribed rest. Prescribed rest, particularly, was common for concussion because strenuous cognitive and physical activity often exacerbated symptoms. Rest was thought to mitigate discomfort and brain activity that would otherwise worsen injury. Early return to activity also predisposed patients to re-injury and second impact syndrome, resulting in many consensus statements recommending rest until symptom resolution.​17​

Recently, however, there has been a paradigm shift on how prescribed rest is perceived as studies showed paradoxical delayed recovery or no benefit with prolonged rest​18,19​ as well as provocation of post-concussive symptoms.​3​ Instead, rest is now recommended for the first 24-48 hours of injury, after which moderate exercise or exercise as tolerated is recommended.​17​ Tolerated exercise, in place of merely rest, is thought to help recovery from concussions based on studies showing that exercise enhances neural plasticity​20​ and cerebral perfusion.​21​ Preliminary studies also substantiate that moderate exercise is potentially helpful in expediating recovery. Leddy et al (2019)​22​ performed the first randomized control trial (RCT) that showed lower recovery times with sub-symptom threshold exercise by a median of 4 days compared to control. It is becoming more apparent that exercise may be beneficial to concussed patients, and this is recognized in the most recent international consensus conference for concussions in sports.​17​

Concussion management therefore centers around rest in the acute phases of recovery, followed by exercise as tolerated. Most patients will be able to be managed in this manner, while some may choose to use medication such as acetaminophen or ibuprofen to supplement recovery. Evidence also shows that athletes may opt to have physiotherapy, which can expedite recovery for sports related injuries.​23​ There is also a role for psychiatric assessments in the context of mTBIs, as depression and anxiety may develop in concussed patients. A significant proportion of patients with concussions develop mental health concerns,  which should be recognized and closely followed.​24​

Here we have a 31-year old man, Joey, who was struck in the head 13 times while wearing bubble wrap. He then experienced some transient tinnitus with no other acute findings. He was otherwise alert and oriented with a GCS of 15, and evidently in no acute distress.

Later that day, however, Joey exhibited questionable judgement and emotional instability in addition to forgetting his dry cleaning. He showed some aberrant behavior following a plausible mechanism of head injury, which can appear consistent with a mild traumatic brain injury.

If his aberrant behavior was abnormal to him and his peers, a diagnosis of concussion should be considered. He would still, however, need to be worked up to rule out confounding differentials and sinister neurocranial injuries. History and physical would be paramount, but CT would not be considered based on CCHR recommendations.

However, for those that have seen 200+ episodes of Friends we know that Joey isn’t the average person. He has a longstanding history of being forgetful, and a reliable reputation for being “half-witted.” He is the same guy we watched making foreskin from silly putty and who calls his laryngeal prominence his “Joey’s apple.” He isn’t quite normal, and he isn’t quite predictable, but he is a perfect example of the importance of assessing baseline functioning before coming to a diagnosis. If we bear in mind his baseline, the diagnosis becomes clearer.

Essentially, it is likely that he isn’t concussed. He’s just being himself – Joseph F. Tribbiani.

Nick is a medical student at the University of Toronto with an interest in emergency medicine. Aside from medicine, he is a self-proclaimed 3 time Friends Trivia Champion, and he is a competitive golfer and professional pool player.

Dr. Wes Armstrong is a resident in the FRCP EM program at University of Toronto. He is currently completing a subspecialty training year in Sports Medicine.